Books I've Read: In the Key of Nira Ghani 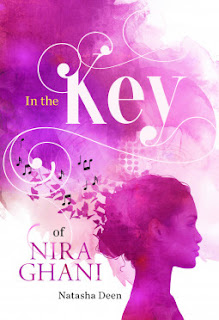 I have read a lot of books recently which deal with the immigrant experience and one of the things I've noticed is that regardless of where the family has come from, the struggles they face in a new country are the same.  In this book the family was from Guyana, but the challenges Nira faces are not unlike those experienced by families in other books from countries as diverse as India, Iran, Korea and more.
All the teens in these books face discrimination from their peers and the general public whether it's because of the color of their skin, the clothes they wear, their accent or anything else that makes them in some way different.  In this book Nira feels like McKenzie, the popular girl at school purposely misunderstands everything about her and makes derogatory comments about her diet or religion just to humiliate her.
On top of this, Nira has to deal with pressure from her parents to succeed at school and to get high enough grades to become a doctor.  And to make things worse, her cousin Farah now lives in the same city and the parents like to get together to compete over whose daughter is the best.  And Farah always seems to be one step better.
Nira doesn't even want to be a doctor. She loves music and is a talented trumpet player, even if her trumpet is not the best available.  When the opportunity arises to try out for the school's jazz band, Nira knows this is her chance to shine.  But first she needs to get her parents' permission and that's not going to be easy when her parents consider music to be frivolous.
On top of this, Nira's best friend Emily is suddenly including McKenzie in everything they do, causing a fracture in the friendship Nira has always counted on.  And there's Noah, the gorgeous boy who suddenly takes in interest in Nira once she starts talking about music.  Things get even more complicated when Farah inserts herself into their expanded friend group and starts cozying up to Noah.
Suddenly Nira's only ally seems to be her grandmother, but even she won't always stand up for Nira in the face of her parents' demands.  With her world pulling her in too many directions with its demands, Nira can't figure out how to keep all the people she cares about happy without hurting herself.
I really enjoyed this coming of age story.  Nira's struggles to find herself and her place in the world are not unique to the immigrant experience, but universal and every teen will be able to see themselves and their struggle for independence in Nira's story.  The cultural references included give the story added flavour and create an immersive and realistic world against which Nira's story plays out.
I would recommend this one to anyone who enjoys a good coming of age story.
But don't just listen to me.  Here's the blurb:
Nira Ghani has always dreamed of becoming a musician. Her Guyanese parents, however, have big plans for her to become a scientist or doctor. Nira's grandmother and her best friend, Emily, are the only people who seem to truly understand her desire to establish an identity outside of the one imposed on Nira by her parents. When auditions for jazz band are announced, Nira realizes it's now or never to convince her parents that she deserves a chance to pursue her passion.
As if fighting with her parents weren't bad enough, Nira finds herself navigating a new friendship dynamic when her crush, Noah, and notorious mean-girl, McKenzie "Mac," take a sudden interest in her and Emily, inserting themselves into the fold. So, too, does Nira's much cooler (and very competitive) cousin Farah. Is she trying to wiggle her way into the new group to get closer to Noah? Is McKenzie trying to steal Emily's attention away from her? As Farah and Noah grow closer and Emily begins to pull away, Nira's trusted trumpet "George" remains her constant, offering her an escape from family and school drama.

But it isn't until Nira takes a step back that she realizes she's not the only one struggling to find her place in the world. As painful truths about her family are revealed, Nira learns to accept people for who they are and to open herself in ways she never thought possible.

A relatable and timely contemporary, coming-of age story, In the Key of Nira Ghani explores the social and cultural struggles of a teen in an immigrant household.
Posted by Kate Larkindale at 4:42 PM