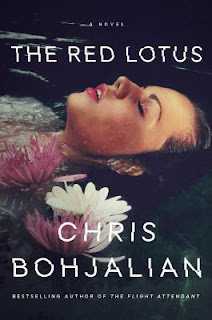 This is an exciting, twisty little thriller that I enjoyed very much even though some of the premise kind of grossed me out.  I won't go into that part because it's part of the twist, but just be aware that there are some parts that may not be good for the squeamish...
The book opens with Austin and Alexis meeting in the ER after Austin is shot in an altercation in a bar.  It quickly fast forwards six months to the now-coupled pair on a cycling trip in Vietnam.  Austin's father and uncle fought in Vietnam and the tour they are on takes them close to the place they fought.  The ride planned for that day doesn't go by the place, so Austin sets out alone, leaving Alexis to cycle with the group and return to their hotel ahead of him.  But when Austin hasn't returned by dinner time, Alexis begins to worry.
With a dropped energy gel the only clue to his disappearance, Alexis finds herself thrust into a nightmare.  She has to deal with local police, the FBI, Austin's family and her own complex relationship with her mother.  And as she grapples with these things, she discovers that Austin lied to her about several things, forcing her to question if he really was the person she thought he was.
After returning home, Alexis continues to try and discover what actually happened to her boyfriend, and who he really was.  And as she digs deeper, she discovers more secrets and some shady people who seemingly will stop at nothing to turn a profit.
This was a quick, compelling read that I raced through in order to find out exactly what was going on and who was involved.  Most of the characters are little more sketches or stereotypes, but in this type of story, that is less important than the action driving the plot forward.  And when the truth is revealed, it's pretty horrific to think about.  Yet time and time again we have seen how people can be compelled to evil for far less than what is at stake here.
So I'd recommend this one if you're looking for something fast-paced and engrossing and don't mind the odd disgusting bit.
But don't just listen to me.  Here's the blurb:
From the #1 New York Times bestselling author of Midwives and The Flight Attendant comes a twisting story of love and deceit: an American man vanishes on a rural road in Vietnam, and his girlfriend, an emergency room doctor trained to ask questions, follows a path that leads her home to the very hospital where they met.
The first time Alexis saw Austin, it was a Saturday night. Not in a bar, but in the emergency room where Alexis sutured a bullet wound in Austin's arm. Six months later, on the brink of falling in love, they travel to Vietnam on a bike tour so that Austin can show her his passion for cycling and he can pay his respects to the place where his father and uncle fought in the war. But as Alexis sips white wine and waits at the hotel for him to return from his solo ride, two men emerge from the tall grass and Austin vanishes into thin air. The only clue he leaves behind is a bright yellow energy gel dropped on the road.

As Alexis grapples with this bewildering loss, and deals with the FBI, Austin's prickly family, and her colleagues at the hospital, Alexis uncovers a series of strange lies that force her to wonder: Where did Austin go? Why did he really bring her to Vietnam? And how much danger has he left her in?

Set amidst the adrenaline-fueled world of the emergency room, The Red Lotus is a global thriller about those who dedicate their lives to saving people, and those who peddle death to the highest bidder.
Posted by Kate Larkindale at 11:00 AM