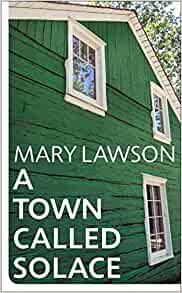 I'm pretty sure I've mentioned Mary Lawson's books here before.  Crow Lake is among my favourite books of all time, and I've enjoyed all her other books too.  So when I saw the Booker Prize longlist and saw her name on it, I was super excited!  It has been a lot of years since her last book came out..

Told from three distinct points of view, A Town Called Solace is the first of Lawson's books to be set outside of the imaginary town of Struan, but Solace is very firmly set in the same Northern Canada area.  I picture the two towns being in close proximity both because the larger city nearby is the same and because the two towns appear to share the same doctor, a character who has appeared in all Lawson's books.

The first POV is a child's.  Clara has been keeping a vigil at the front window of her house since her sister disappeared several weeks ago.  She leaves her post only to go to school and to go next door to feed the cat belonging to the kindly old woman who lives there.  Mrs. Orchard told Clara she was going to the hospital for a short spell, but the weeks have been adding up and Clara is still feeding Moses.

When a young man shows up at Mrs. Orchard's house and appears to be moving in, Clara is startled.

The young man, Liam, is newly divorced, unemployed and drifting, unsure what he's going to do with the rest of his life.  Mrs. Orchard's house is a lifeline while he takes some time out to figure out his future.

Meanwhile, Mrs. Orchard lies in her hospital bed, drifting out of the present and into the past, remembering herself as a heartbroken young woman trying to deal with the latest in a series of miscarriages.  Desperate for a child, she finds comfort in caring for the young boy next door, taking him off his mother's hands while she copes with her older daughters and newborn twins.

How these three peoples' lives entwine and the effects they will have on each others' lives takes time to unfold.  The book's pace unhurried and the story it tells a quiet one.  Yet the revelations, grief and remorse are powerful.  This is a book that will stay with you long after you turn the last page.

I really enjoyed this book, although it didn't have the immediate impact on me that Crow Lake did.  The characters build quietly, slipping almost invisibly under your skin until you realize how much you really do care about them and what might happen to them.  And sometimes that kind of subtle, understated storytelling is exactly what you need.

A Town Called Solace--the brilliant and emotionally radiant new novel from Mary Lawson, her first in nearly a decade--opens on a family in crisis: rebellious teenager Rose been missing for weeks with no word, and Rose's younger sister, the feisty and fierce Clara, keeps a daily vigil at the living-room window, hoping for her sibling's return.

Enter thirtyish Liam Kane, newly divorced, newly unemployed, newly arrived in this small northern town, where he promptly moves into the house next door--watched suspiciously by astonished and dismayed Clara, whose elderly friend, Mrs. Orchard, owns that home. Around the time of Rose's disappearance, Mrs. Orchard was sent for a short stay in hospital, and Clara promised to keep an eye on the house and its remaining occupant, Mrs. Orchard's cat, Moses. As the novel unfolds, so does the mystery of what has transpired between Mrs Orchard and the newly arrived stranger.

Told through three distinct, compelling points of view--Clara's, Mrs. Orchard's, and Liam Kane's--the novel cuts back and forth among these unforgettable characters to uncover the layers of grief, remorse, and love that connect families, both the ones we're born into and the ones we choose. A Town Called Solace is a masterful, suspenseful and deeply humane novel by one of our great storytellers.
Posted by Kate Larkindale at 10:00 AM