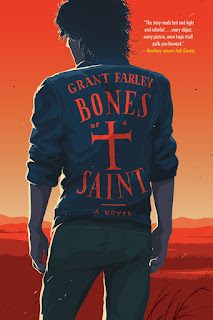 I'm not sure I'll ever get used to books set in my lifetime being considered historical fiction, but here we are.. Bones of a Saint is set in the 1970s in a small California town.  The protagonist, RJ, is the oldest of several siblings, all of whom have different fathers.  At one point he calls them souvenirs of his mother's past relationships, something that struck a chord with me.  With his mother scrabbling to make enough money to support them all, RJ is left in charge a lot of the time, and when he's not looking after his sibs, he's left to roam about unsupervised.

It's little surprise that he catches the attention of the local gang, The Blackjacks and is quickly pulled into their world of petty crime.  Hoping that if he does what they want, they'll leave him alone, RJ agrees to vandalise the house of an old man living on the outskirts of town.

But of course it doesn't end there.  The Blackjacks keep asking for more and their threats - toward him and his family -  grow increasingly violent when RJ pushes back.

And RJ doesn't understand why the gang is attacking the old man so relentlessly.  He seems pretty harmless.  RJ is pulled into his world too, sharing stories about his past with the old man and receiving little pieces of his life in return.

As things begin spiralling out of his control, RJ is forced to make some big decisions that will impact not just his own family, but the future of the whole town.

I found this book a little hard to get into.  I was completely lost at the beginning and it took a few chapters to really ground me in the world and the character's head.  Possibly this is because I was reading an ARC on my phone and the formatting was a little funky, but I think it was also because of the writing style.  It was first person, but I never felt like RJ was drawing me into his head and his world.

The book also felt episodic in parts.  I liked the glimpses into RJ's past we got through he stories he told the old man, but they didn't always tie in with anything else that was happening so while they gave background to the character, it didn't help understand the why of what he was doing at that moment.

I did like the ending and how it made sense of the book's title, but I almost felt like it was too late by then.  A few more clues seeded along the way would have been useful and would have made the last chapters' revelations more satisfying.

So I wouldn't necessarily recommend this book to everyone.  It was engrossing enough once I got into it, but it just wasn't as moving or as exciting as I really wanted it to be.

Thanks to NetGalley for letting me read it early.

Set in Northern California in the late ’70s, this timeless coming-of-age story examines the nature of evil, the art of storytelling, and the possibility of redemption.

Fifteen-year-old RJ Armante has never known a life outside his dead-end hometown of Arcangel, CA. The Blackjacks still rule as they have for generations, luring the poorest kids into their monopoly on petty crime. For years, they’ve left RJ alone…until now.

When the Blackjacks come knocking, they want RJ to prey upon an old loner. But RJ is at his breaking point. It’s not just about the gang who rules the town. It’s about Charley, his younger brother, who is disabled. It’s about Roxanne, the girl he can’t reach. It’s about the kids in his crew who have nothing to live for. If RJ is to resist, he must fight to free Arcangel of its past.
Posted by Kate Larkindale at 3:40 PM