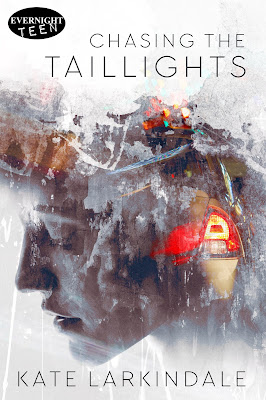 Lucy and Tony share nothing except genes. Tony’s the champion diver destined for greatness. Lucy’s biggest concern is getting Cute Guy from the burger joint to ask her out.
After an accident kills their parents, the siblings are forced to rely on one another—and decide whether to reveal their secrets.
Lucy can’t tell Tony what she knows about the accident for fear of destroying the tentative bond between them. If she doesn’t confess, she might lose her mind. If she does, she might lose the only person she has left who loves her.
Tony has problems too. Between diving practice, classes and concealing the crush he has on his best friend Jake, Tony needs to find room in his life for his sister, but his own stability dwindles with every passing day.
As the siblings struggle to overcome a lifetime of past conflicts and jealousies, they discover they might have more in common than a love of rock music.
Add Chasing the Taillights on Goodreads.
Or purchase at any of these retailers.
Evernight Teen
Amazon
Kobo
Barnes & Noble
Smashwords
Apple Books
Some reviews:
"A heart wrenching story of survival, of hidden truths, of loneliness, confusion and guilt as two teens struggle to overcome both their loss and the barriers that have kept them strangers. Emotionally charged, filled with great dialogue, both inner and outward, the struggles feel real and powerful." - Tome Tender
"Packed with plenty to keep you gripped, this is impossible to put down." - Bibliophile Ramblings
"I absolutely loved this novel, and once again I was not disappointed. Tony and Lucy are two very interesting and loveable characters and I got attached to Tony very quickly." - Book Me Some Time

And then he’s there.

He steps into the room, his huge frame filling the doorway. He starts toward the bed then stops, his lips pressing together into a thin, white line. He drops his brilliant blue-eyed gaze to the floor for a moment and swallows hard before he looks up again. The scruffy beginnings of a beard shadow his chin.

“Hey, Lucy.” He tries to smile as he crosses to the bed, but his lips tremble too hard for it to be convincing. A muscle jumps in his jaw like a tiny fish trying to escape. “Thank you for being here, Peter.”

“I wish I didn’t have to be.” Peter gets up and gives Tony a brief hug. My brother’s arms don’t move, just hang stiffly at his sides, hands clenched into fists.

Peter lets go and moves aside to let Tony sit next to me. “I’m going to get some coffee. I’ll be back soon.”

Tony watches him go, not turning back to me until Peter’s tall, lean figure has vanished into the hallway. When he does, his eyes are red-rimmed and exhausted. Purple crescents lie beneath them. He looks like shit, but something about the way he’s studying me makes me certain I look worse.

“Oh, Jesus, Lucy.” He shakes his head, a pleading expression on his face. “I have no clue what I’m supposed to say right now.”

I blink up at him. I need him to tell me what happened. I need him to explain it to me. I try to form the words, but they won’t come. My mouth, stitched up like a quilt, won’t shape what I need to say.

I’m holding my breath. My chest aches and I let it out in a gasp. The pain is back, sharp and stabbing at my side, a dull throb in my neck and shoulder. Tony reaches out and touches the side of my face. I flinch, hating myself for it when his fingers are as gentle as rain.

“They’re dead, Lucy. They’re both dead.” His eyes lock onto mine and I know he’s telling the truth. The bleak, stunned look on his face tells me more than any words could. A sob escapes him and he starts to turn away.

Posted by Kate Larkindale at 9:59 AM