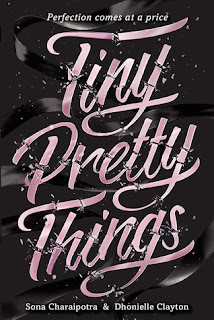 I love books set in the ballet world. I guess I never got over my ballet teacher saying those four little words when I was twelve: You have no talent….

So I live vicariously through books about dancers who do have talent.

Told in three points of view, Tiny Pretty Things is about dancers who may be tiny and pretty on the outside, but appearances can be deceptive. June is Korean and fatherless, her mother close-mouthed about who he even was. She won't speak to June about him or about her time at the same ballet school June now attends. June's insecurities and neuroses manifest themselves in her eating disorder, the one part of her life she can control after she's cast as an understudy in production after production.

Gigi is the new girl, a glamorous black dancer from California who fits in at the school about as well as a square peg in a round hole. When she is cast in the best parts in the school's productions, and all the most eligible boys start swarming around her, Gigi has trouble written all over her, not to mention a heart condition she doesn't want anyone to find out about in case it makes her look weak.

Finally, there's Bette. Long considered the school's best dancer, she's unused to competition in the studio or anywhere else. Half of the school's golden couple, she seems untouchable. Yet Bette has a secret festering inside her. And when Gigi shows up and takes the roles she considers rightfully hers, Bette can't help but retaliate.

All three characters are deliciously flawed. They are fiercely motivated and ambitious, willing to do just about anything to get to the top as dancers. And I mean anything! These girls are mean. Vicious. Savage.

I couldn't put it down, and as soon as I finished it, I went and bought the sequel, needing more of their malevolent behavior.

Black Swan meets Pretty Little Liars in this soapy, drama-packed novel featuring diverse characters who will do anything to be the prima at their elite ballet school.

From the New York Times-bestselling author of The Belles, Dhonielle Clayton, and the author of the highly anticipated Symptoms of a Heartbreak, Sona Charaipotra.

Gigi, Bette, and June, three top students at an exclusive Manhattan ballet school, have seen their fair share of drama. Free-spirited new girl Gigi just wants to dance—but the very act might kill her. Privileged New Yorker Bette's desire to escape the shadow of her ballet-star sister brings out a dangerous edge in her. And perfectionist June needs to land a lead role this year or her controlling mother will put an end to her dancing dreams forever.

When every dancer is both friend and foe, the girls will sacrifice, manipulate, and backstab to be the best of the best.
Posted by Kate Larkindale at 11:08 AM