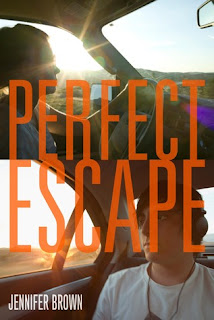 I've been a fan of Jennifer Brown since Hate List, but this is definitely my favorite of her books.

Kendra is a perfectionist, something she has cultivated as a way to keep herself from disappearing in a household that revolves almost entirely around her older brother, Grayson, and his OCD.  But perfection isn't something that's easy to attain and when Kendra gets caught up in a cheating scandal, she doesn't have the resources to handle it.

So she runs.  With Grayson in the car next to her.

As the pair drive around the country, Grayson's regular routines - the only thing that keeps his life in balance - are thrown out of whack and Kendra is forced to deal with the realities of what Grayson has to cope with every day.  She must also face up to her own problems and recognize that perfection isn't actually attainable or even desirable some of the time.

With their parents growing increasingly frantic at the other end of the phone, Kendra needs to cut herself a break, stop running and bring her brother home.  Regardless what she might have to face when she gets there.

I really enjoyed this book.  Grayson's OCD is painfully evoked, but he is not just an illness.  Underneath all the quirks and behaviors is a person who suffers and loves as much as Kendra does.  And when the shit really hits the fan, he's the one with the strength and presence of mind to get them out of it.

One I'd definitely recommend.

Kendra has always felt overshadowed by her older brother, Grayson, whose OCD forces him to live a life of carefully coordinated routines. The only way Kendra can stand out next to Grayson is to be perfect, and she has perfection down to an art -- until a cheating scandal threatens her flawless reputation.

Behind the wheel of her car, with Grayson asleep beside her, Kendra decides to drive away from it all -- with enough distance, maybe she'll be able to figure everything out. But eventually, Kendra must stop running and come to terms with herself, her brother, and her past.

With undeniable grace and humor, acclaimed author Jennifer Brown explores OCD, the pressure for perfection, and the emotional highs and lows of a complex sibling relationship.
Posted by Kate Larkindale at 11:23 AM