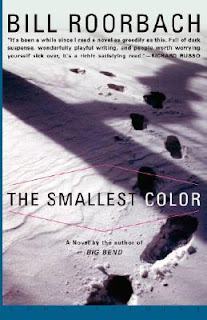 With the library closed, I haven't been able to get anything new to read for a couple of weeks, so I have been trawling my shelves at home and re-reading things I haven't looked at for a while. And yes, before you say anything, I know I can get e-books. I just don't have a tablet or e-reader, so can only read e-books on my phone, which is fine while commuting or eating lunch at work or any of the other places I quite happily read on my phone. It's just not great for reading in the bath or outside on my deck which are the two places I like to read at home.

Hence the return to old favorites...

This one is among my all-time favorite books. Set in two eras, it follows Coop through the summer in the 1960s when his brother disappeared and again when he's in his forties and the trauma of that summer begins to haunt him all over again.

The two stories weave together seamlessly and the author skillfully manages to capture the voice of sixteen-year-old Coop as well as the older, more world-weary one without making the two seem like completely different people. The older Coop isn't the nicest guy and some of his choices are seriously fucked up, but when viewed in the context of what happened years before, they are completely true to his character.

The depiction of the sixties and the counterculture movements that swelled in strength during this time is vivid and feels wholly realistic. As does Coop's devotion to his brother, the older figure he's wanted to be like throughout their childhood. Together they have survived and defied their overbearing father and it is this that bonds them as they travel through that last summer together. The summer that lead to the disappearance that continues to haunt Coop's life.

When his mother threatens to hire a detective to try once and for all to find out what happened that summer, Coop must face up to what happened before the secrets he's been holding for 30 years tear him and the life he's built apart.

Beautifully written and with an intriguing mystery at the center, this book will keep you turning pages long into the night.

Coop Henry's secret needs attention. His missing brother haunts his life and he isn't holding up well under the strain. When his mother threatens to hire a detective in one last desperate attempt to discover what happened to his brother 30 years before, Coop's life begins to come unglued.
Posted by Kate Larkindale at 11:14 AM