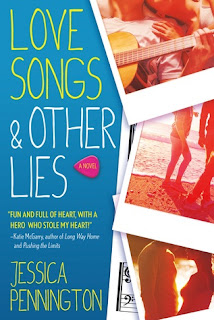 This is a fun, easy read and one I breezed through in an afternoon.

Set during a televised battle-of-the-bands type competition, the book spans two time periods, one in the present and one in the past.

Vee thinks she's joining her best friend to tour with him and his band while they compete in the competition.  What he hasn't told her is that Cam, her first love and worst break-up has re-joined the band and will be touring too.

The book weaves together the story of Cam and Vee's relationship with the present day story where Cam tries to earn Vee's forgiveness while at the same time trying to win the competition.

It's a fantastic high-pressure atmosphere for this story to play out, especially since there are cameras following their every move and the network has cast Vee as her best friend's girl friend, not Cam's.  If she gets portrayed as a skank on national television, it could jeopardize the band's chances of winning.

There are lots of layers to this book, with all the characters bringing their own baggage and secrets.  As the story unfolds, so do the secrets, revealing just how damaged all these characters are, and exactly why they should or shouldn't be together.

I really enjoyed this one because I didn't see all the twists coming.  Some of them, yeah.  But not everything.  And some of them were truly surprising, keeping me turning the pages to see where everything ended up.

It’s summer romance and second chances, the songs that stay in your head, and the boy you’ll never forget.

Two years after rock-song-worthy heartbreak, Virginia Miller is looking forward to a fun, carefree summer. Her friends just landed a spot on a battling bands reality show, and Vee is joining them for her dream internship on tour. Three months with future rockstars seems like an epic summer plan. Until she learns she’ll also be sharing the bus with Cam. Her first love, and her first heartbreak. Now Vee has more than just cameras to dodge, and Cam’s determination to win her forgiveness is causing TMZ-worthy problems for both of them. With cameras rolling, she’ll have to decide if her favorite breakup anthem deserves a new ending. And if she’s brave enough to expose her own secrets to keep Cam’s under wraps.
Posted by Kate Larkindale at 9:20 AM