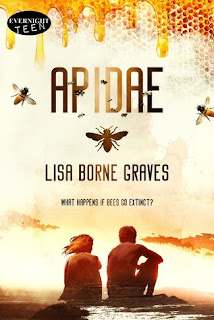 In a world where climate change is threatening to change everything, the premise of this book - a world in which bees have been wiped out - is not as far fetched as you might think.  In this future, a militant organization does everything it can to keep those who wish to re-populate the bees down.  And that includes killing the people whose scientific research has led to genetically modifying people to be able to communicate with bees and possibly even pollinate themselves.

So far only two people who can do this have been created: Emlyn and Ace.  As soon as they meet one another, they know they are made for each other.  Their blood sings together and the bee venom in there makes it difficult to be apart.  At the same time, that same venom makes them volatile and angry, so the path of their attraction does not run smoothly.  Especially when they are on the run from militant agents who wish to kill them, and searching a hostile, fearful country for safety with a band of rebels.

I enjoyed this fast-paced, futuristic read.  There was plenty of action to keep the plot moving, but I felt like a little more world-building would not have gone amiss.  I never really understood the motivations of the MICE agents and why they would want the bees to remain gone permanently.  It seems to me there are better ways to control the people, than to keep them from being able to grow their own food.

What happens if bees go extinct?


In the not so distant future, scientifically modified Emlyn and Ace find themselves thrown into the role of saviors on a perilous mission where their tenuous relationship could save or destroy mankind. As the war between rebels and the corrupt government reaches a fever pitch, Ace is bent on self-sacrifice and revenge, while Emlyn must choose between her heart and the future of mankind.
Posted by Kate Larkindale at 12:30 AM