Books I've read: Take Me With You When You Go 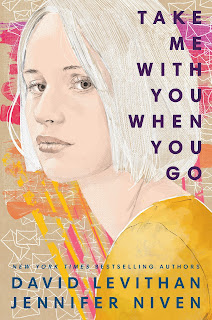 I read this one in a single sitting because it was such a quick, compelling read.  I'm not usually a huge fan of books written as letters or emails because they usually tell more than they show just because of the nature of writing to someone about things that have already happened.  And this book does fall into that somewhat, but because the stories unfolding through the emails are so full of peril for the participants, it's very readable.

When Ezra wakes one morning to find his sister gone, he's both angry and terrified.  He discovers a secret email address she's left for him and this becomes a lifeline for him as he tries to figure out how to survive at home without her.  For years they have taken care of each other, navigating an abusive stepfather and a negligent mother who turns a blind eye to the abuse.

At the other end of the email, Bea is discovering that running away from home is one thing; surviving away from home is another.  She is in a new city without any friends or support and very little money, but is determined to stay because she has a spark of hope that she might find what she has been searching for in that city.

As things go from bad to worse in both locations, the siblings desperately cling to the lifeline the emails create between them as the only way to keep their connection to one another alive.

As many of you will know, I am always fascinated with stories that delve into sibling relationships, particularly where the siblings involved are dealing with less than perfect home environments.  So this one was right up my alley!  Ezra and Bea are great characters each with their own distinct personalities and ways of dealing with the trauma in their lives.

I would definitely recommend this one.  It's a quick, easy read, but one that will stick with you after you've finished it.

From the New York Times bestselling authors of All the Bright Places and Every Day comes a story of hope, family, and finding your home in the people who matter the most.

Ezra Ahern wakes up one day to find his older sister, Bea, gone. No note, no sign, nothing but an email address hidden somewhere only he would find it. Ezra never expected to be left behind with their abusive stepfather and their neglectful mother - how is he supposed to navigate life without Bea?

Bea Ahern already knew she needed to get as far away from home as possible. But a message in her inbox changes everything, and she finds herself alone in a new city - without Ez, without a real plan - chasing someone who might not even want to be found.

As things unravel at home for Ezra, Bea confronts secrets about their past that will forever change the way they think about their family. Together and apart, broken by abuse but connected by love, this brother and sister must learn to trust themselves before they can find a way back to each other.
Posted by Kate Larkindale at 11:00 AM