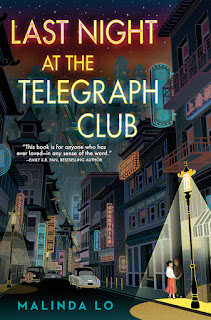 I kept hearing about this book and how good it was, so I was pretty thrilled to find it at the library so I could read it and find out if all the chatter was true.
It is.
Set in the 1950s in San Francisco's Chinatown, this is an important and fascinating story about a first generation Chinese girl struggling to come to terms with the various facets of her identity.  She's American.  She's Chinese.  And she's pretty sure she might be a lesbian as well. Being a lesbian in the 1950s was hard enough without the added layer of cultural expectation that comes from being both Chinese and an immigrant.
This book balances all these things against a backdrop of the Communist scare and increasing hostility toward Chinese who might be sympathisers.  Lilly's fear of being outed as a lesbian is echoed by others in the neighbourhood who are equally terrified of being accused of being Communist sympathisers.
The relationship between Kath and Lily is organic, growing from tentative to bold an back again as the realities of being queer in this time and place contain and constrict their movements and activities.  I also really enjoyed the ups and downs of Lily's friendship with Shirley, her best friend from childhood who she might just have outgrown.
The titular Telegraph Club is based on several real-life clubs that existed in San Fran at the time and is described in such a way I could feel the heat of too many bodies pressed together, smell the smoke and sense the mixture of fear an excitement that must have touched everyone in the room.  That sense of doing something slightly dangerous and forbidden, yet being fascinated by it to the point of obsession.
So I would definitely recommend this one.  It's a great story set in a challenging time period and offers a glimpse into a culture we rarely get to see.
But don't just listen to me.  Here's the blurb:
A story of love and duty set in San Francisco's Chinatown during the Red Scare.

“That book. It was about two women, and they fell in love with each other.” And then Lily asked the question that had taken root in her, that was even now unfurling its leaves and demanding to be shown the sun: “Have you ever heard of such a thing?”

Seventeen-year-old Lily Hu can’t remember exactly when the question took root, but the answer was in full bloom the moment she and Kathleen Miller walked under the flashing neon sign of a lesbian bar called the Telegraph Club.

America in 1954 is not a safe place for two girls to fall in love, especially not in Chinatown. Red-Scare paranoia threatens everyone, including Chinese Americans like Lily. With deportation looming over her father—despite his hard-won citizenship—Lily and Kath risk everything to let their love see the light of day.
Posted by Kate Larkindale at 3:35 PM