Books I've Read: Outside Looking In 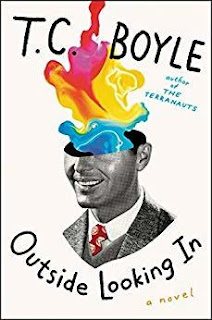 I seem to have picked up a few of T.C. Boyle's books recently, after not having read anything by him for a number of years.  Not really on purpose either, just because they looked interesting.

This one is set at Harvard in the 1960s.  Fitz is a graduate student, married with a child and a little older than most of the other grad students in his psych class.  Yet still young enough to be as much in the thrall of of his charismatic professor as any of the other students.

Tim is experimenting on the cutting edge of psychology, using LSD, a drug first synthesised in Germany during WWII, to explore the possibilities of the human mind.  It is a course requirement that all the students partake and Tim hosts regular Saturday night gatherings for his acolytes.  Fitz is initially wary, but wants to remain in the course and does not want to be isolated from Tim.

When he and Joanie join their first gathering, the drug blows both their minds.  Everything is better, heightened by LSD.

Before long, what began as clinical trials starts spinning out of control.  Tim's core group spends a summer away from the university, living and tripping as a new community in Mexico.  Lines and loyalties blur as this enlightened community searches for God and the meaning of existence while on increasingly large doses of hallucinogens.

When their lifestyle experiments lead to expulsion from Harvard, they move into an empty rural mansion to continue their search for enlightenment.  But as time goes on, financial considerations, loyalties and the shifting group dynamics make what once seemed like paradise into a living hell.

I kind of enjoyed this book, even though all the characters - and there were a lot of them - really irritated me.  It felt very real and exactly what I imagine commune living to be like.  There is a reason why I don't live on a commune...

Weirdly, it never occurred to me that the Tim in the book was supposed to be Timothy Leary!  Guess I should have read the blurb before I started reading.  I might have read him differently if I had figured that out.  Although I doubt he would have been any less irritating.

If you're interested in the '60s counterculture, this is a good introduction that doesn't gloss over the downsides of living a perpetually high life.  I'd recommend it, but with the caveat that the characters are kind of losers and difficult to like.

A provocative new novel from bestselling author T.C. Boyle exploring the first scientific and recreational forays into LSD and its mind-altering possibilities

In this stirring and insightful novel, T.C. Boyle takes us back to the 1960s and to the early days of a drug whose effects have reverberated widely throughout our culture: LSD.

In 1943, LSD is synthesized in Basel. Two decades later, a coterie of grad students at Harvard are gradually drawn into the inner circle of renowned psychologist and psychedelic drug enthusiast Timothy Leary. Fitzhugh Loney, a psychology Ph.D. student and his wife, Joanie, become entranced by the drug’s possibilities such that their “research” becomes less a matter of clinical trials and academic papers and instead turns into a free-wheeling exploration of mind expansion, group dynamics, and communal living. With his trademark humor and pathos, Boyle moves us through the Loneys’ initiation at one of Leary’s parties to his notorious summer seminars in Zihuatanejo until the Loneys’ eventual expulsion from Harvard and their introduction to a communal arrangement of thirty devotees—students, wives, and children—living together in a sixty-four room mansion and devoting themselves to all kinds of experimentation and questioning.

Is LSD a belief system? Does it allow you to see God? Can the Loneys’ marriage—or any marriage, for that matter—survive the chaotic and sometimes orgiastic use of psychedelic drugs? Wry, witty, and wise, Outside Looking In is an ideal subject for this American master, and highlights Boyle’s acrobatic prose, detailed plots, and big ideas. It’s an utterly engaging and occasionally trippy look at the nature of reality, identity, and consciousness, as well as our seemingly infinite capacities for creativity, re-invention, and self-discovery.
Posted by Kate Larkindale at 11:00 AM