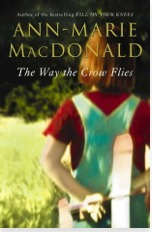 I finished all my library books the first weekend of our latest lockdown and was forced to trawl my bookshelves at home for things to read.  Since the same thing happened during last year's lockdown, I found there wasn't much there I hadn't read recently.

Then I came upon this book and decided to give it a whirl.

Basically it is a family saga spanning twenty-years in the McCarthy family.  But at the same time it's a mystery and a thoughtful examination of Canada's part in the Cold War.

The McCarthys are an Air Force family.  The book opens as they are driving to the Air Force base in the middle of nowhere that will be their new home after their most recent posting in Germany.  Father, Jack, is excited to be returning to Centralia where he did his training.  He has happy memories of the base, despite it being the site of the plane crash that scuppered his flying career just as the War was ramping up.

The living quarters at Centralia create a picture-perfect suburbia.  There is ample space for the kids to play, but they are rarely out of sight from one or more attentive mother.  It doesn't take long for Madeline, the younger of the McCarthy's two children, to make friends within the community.

Wife, Mimi, beautiful, exotic and still very much in love with her husband, Jack, is so used to re-settling, it takes no time at all to get the house looking and feeling like a home.  She quickly befriends the other wives and is easily accepted into their social groups.

Jack has a little more trouble settling in.  He has things on his mind.  Secret things.  He has been asked by an old acquaintance to be part of a top secret mission.  Initially, it doesn't seem hard, but as the demands on him become greater, he finds himself in the difficult position of having to lie to his wife to protect his secrets.

And when a local girl, a girl in his beloved Madeline's class, is murdered, he finds himself in a position where his loyalties are torn.  Unable to reconcile the secret with the public and his own role in the events spiraling out of control, he gives his daughter advice that will echo through the next twenty years of  their lives.

I loved this book.  The Cold War setting gave even the most idyllic moments a sense of disquiet and unease.  Madeline is a very real child, dealing with questions and moral ambiguity beyond her ability to understand.  The supporting characters are also really well drawn, particularly the slightly odd German neighbors who Jack quickly befriends.

It is a long book, and I feel like there are definitely parts that could have been edited down, or cut out, but it is very enjoyable and will keep you guessing right until the very last pages.

The optimism of the early sixties, infused with the excitement of the space race and the menace of the Cold War, is filtered through the rich imagination of high-spirited, eight-year-old Madeleine, who welcomes her family's posting to a quiet Air Force base near the Canadian border. Secure in the love of her beautiful mother, she is unaware that her father, Jack, is caught up in a web of secrets. When a very local murder intersects with global forces, Jack must decide where his loyalties lie, and Madeleine will be forced to learn a lesson about the ambiguity of human morality -- one she will only begin to understand when she carries her quest for the truth, and the killer, into adulthood twenty years later.
Posted by Kate Larkindale at 11:23 AM