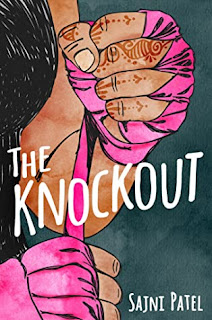 Netgalley let me read this book early and I'm grateful for that.  I mean, look at that cover!  It's gorgeous!

The Knockout is about Kareena Thakaar, a seventeen-year-old Indian American who does't quite fit the mould of perfect Indian daughter.  She fights Muay Thai and is making a name for herself in the sport. If she can raise enough money, she can fight in the US championships.  And if she does well there, she might even make the Olympic team.

She needs to focus and she needs to train.  But it's not easy.  Her father is sick and she's all too aware of how much his continual medical treatments and hospitalizations cost.  And then there's Amit, the super-smart, perfect Indian valedictorian who inexplicably needs tutoring in computer science.  Amit, who makes her feel all kinds of things she's never felt before.

Kareena has always considered herself not Indian enough.  Indian girls don't fight, yet fighting is what she's good at.  Indian girls are involved with the Indian community and go to the mandir.  Yet Kareena's family don't go to mandir and her mother is too busy working two jobs to join the other aunties in their gossip and matchmaking.

There was a lot to like about this book, but it fell flat for me.  I wanted to really root for Kareena, but she never really became a fully formed character for me and her constant negativity about herself was draining.  She only needs to look around at the friends and family who support her to see that she isn't actually lacking in any of the ways she seems to think she was.

It was also difficult to believe Amit's character, especially the high-level programming job he has.  The kid is seventeen.  He's not going to be given access to patient's medical records, even in the line of duty. And who hires their seventeen-year-old nephew to do something this high-level anyway? Not to mention he's just too nice, especially when Kareena is anything but toward him.

The writing wasn't fantastic either, which is perhaps why the characters fell flat for me.

So overall, while I loved the premise and the Muay Thai fighting, this one just isn't as good as it could have been.
But don't just listen to me.  Here's the blurb:

A rising star in Muay Thai figures out what (and who) is worth fighting for in this #ownvoices YA debut full of heart.

If seventeen-year-old Kareena Thakkar is going to alienate herself from the entire Indian community, she might as well do it gloriously. She’s landed the chance of a lifetime, an invitation to the US Muay Thai Open, which could lead to a spot on the first-ever Olympic team. If only her sport wasn’t seen as something too rough for girls, something she’s afraid to share with anyone outside of her family. Despite pleasing her parents, exceling at school, and making plans to get her family out of debt, Kareena’s never felt quite Indian enough, and her training is only making it worse.

Which is inconvenient, since she’s starting to fall for Amit Patel, who just might be the world’s most perfect Indian. Admitting her feelings for Amit will cost Kareena more than just her pride–she’ll have to face his parents’ disapproval, battle her own insecurities, and remain focused for the big fight. Kareena’s bid for the Olympics could very well make history–if she has the courage to go for it.
Posted by Kate Larkindale at 11:16 AM