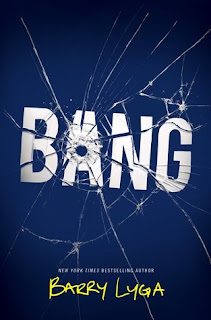 I read this book over the weekend in about two hours.  I couldn't put it down once I started.

It's about Sebastian, an ordinary kid with a terrible event in his past: when he was four, he shot and killed his baby sister with a gun his father left lying around.

Obviously this event has been crucial in his life - even if he doesn't actually remember it.

Everyone in town knows he's the kid who killed his sister, so it isn't something he can get away from.  Every time the conversation gets close to guns, awkwardness ensues.

The event tore apart his parents' marriage too, so now he lives with just his mother, avoiding talking to her as much as possible and trying to take up as little space as he can so he won't remind her of the tragedy.  It's not a great way to live, but Sebastian has a plan to end it all.  He's just waiting for the right moment.  He has already picked the place.

But then Aneesa moves in down the street and everything changes.  She doesn't know about his past.  She even seems to like him.  So does her family - a big change from his best friend's family who tend to treat him with suspicion.

With his best friend away for the summer, Sebastian and Aneesa start spending time together, building a You-tube channel to show off Sebastian's pizza-making prowess.  As they work together, they grow closer and Sebastian starts to see that he's not the only one whose life is impacted by things he can't change - Aneesa is a target because she's Muslim.

As they grow closer and the channel becomes more and more successful, Sebastian finds himself thinking about his plan less and less.  His fans online don't know who he is, don't know his terrible secret.  For the first time he can live without everything being shadowed by that one act. He even feels hopeful about the new school year and the future, possibly for the first time.

But nothing stays secret forever, and when Sebastian's identity is exposed online, it's just the beginning of a downward spiral that sends him running back toward his initial plan all over again.

This wasn't a long book, but it packed a lot in.  Sebastian was heartbreakingly real - too young to fully understand everything he heard and saw around him, yet old enough to see how horribly it affected everyone.  It has made him quite self-centered in many ways, but not in an unpleasant way.  It was more for protection, to keep himself from being hurt by things people said to him, and the way people acted around him.

There was a nice twist toward the end too, something I did not see coming at all, although maybe I should have...  I won't spoil it for you though.

So, I'd recommend this one.

One shot ruined his life. Another one could end it.

Sebastian Cody did something horrible, something no one—not even Sebastian himself—can forgive. At the age of four, he accidentally shot and killed his infant sister with his father’s gun.

Now, ten years later, Sebastian has lived with the guilt and horror for his entire life. With his best friend away for the summer, Sebastian has only a new friend—Aneesa—to distract him from his darkest thoughts. But even this relationship cannot blunt the pain of his past. Because Sebastian knows exactly how to rectify his childhood crime and sanctify his past.

It took a gun to get him into this.

Now he needs a gun to get out.
Posted by Kate Larkindale at 11:00 AM