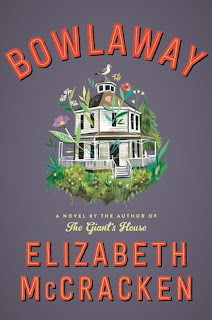 I read another book by Elizabeth McCracken many years ago and think I enjoyed it, so when I saw this in the library, I thought I'd give it a go.

It's an epic historical novel set across three generations in a small New England town.  The writing is gorgeous, with lots of acidic descriptions, and characters with odd little quirks.  Yet somehow I didn't find it at all satisfying.

The book begins with Bertha Truitt arriving in Salford.  No one knows where she came from, and she's not saying.  All she has with her is a bag full of bowling equipment and gold.  All she wants to talk about is bowling.

Before long she has used the gold to build a bowling alley and scandalously allows, no, encourages, women to bowl too.  Even more scandalous, she marries the doctor who was one of those who discovered her.  A black man from Canada who she builds a peculiar house with and starts a family.

When a freak accident involving treacle kills Bertha, the future of the bowling alley is unclear.  Especially after a man appears, claiming to be her son (although he appears to be the same age or older than people remember Bertha being) and takes over.

Bertha's secrets and her unwillingness to speak of her past haunt the alley and the generations of family that inherit it - often unwillingly - and create ripples that spread far beyond the small town and its community.

The writing, as I mentioned, was witty and clever, but I think maybe it also kept the character's emotional truths obscured.  There were characters in there I knew I could care about, but I never felt like I was let far enough into their thoughts and feelings to truly connect with them.

And as a result, I reached the end of the book with more of a sense of relief that I'd finished it than anything else.

So I wouldn't necessarily recommend this one.  If you have an interest in bowling, particularly candlepin bowling (which is different to ten-pin bowling), you may enjoy this, but then again, maybe not...

A sweeping and enchanting new novel from the widely beloved, award-winning author Elizabeth McCracken about three generations of an unconventional New England family who own and operate a candlepin bowling alley.

From the day she is discovered unconscious in a New England cemetery at the turn of the twentieth century—nothing but a bowling ball, a candlepin, and fifteen pounds of gold on her person—Bertha Truitt is an enigma to everyone in Salford, Massachusetts. She has no past to speak of, or at least none she is willing to reveal, and her mysterious origin scandalizes and intrigues the townspeople, as does her choice to marry and start a family with Leviticus Sprague, the doctor who revived her. But Bertha is plucky, tenacious, and entrepreneurial, and the bowling alley she opens quickly becomes Salford’s most defining landmark—with Bertha its most notable resident.

When Bertha dies in a freak accident, her past resurfaces in the form of a heretofore-unheard-of son, who arrives in Salford claiming he is heir apparent to Truitt Alleys. Soon it becomes clear that, even in her death, Bertha’s defining spirit and the implications of her obfuscations live on, infecting and affecting future generations through inheritance battles, murky paternities, and hidden wills.

In a voice laced with insight and her signature sharp humor, Elizabeth McCracken has written an epic family saga set against the backdrop of twentieth-century America. Bowlaway is both a stunning feat of language and a brilliant unraveling of a family’s myths and secrets, its passions and betrayals, and the ties that bind and the rifts that divide.
Posted by Kate Larkindale at 11:24 AM