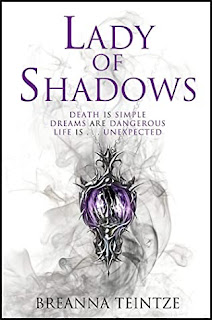 Once again, this is a fantasy novel that even I, well-known loather of fantasy, loved.  It's the sequel to Lord of Secrets which I also loved, and may even be a bigger roller-coaster ride than the first book.

Corcoran Gray is back, but he's living in the new body he stole from the guy calling himself the god Jaern.  It's a better body than his old, lame one, but is no more immune to the forces of magic. It doesn't help that the body's previous owner somehow managed to inscribe spells under this body's skin.  Dangerous spells too.

When the Madge's Guild come calling, demanding his help to stop a plague that is felling its members left, right and center, he's forced to call upon every spell he knows and others he doesn't.

Initially reluctant to help the Guild who have been nothing but trouble for him most of his life, Gray agrees to help them after his partner, Brix, is infected.  This plague is a miserable way to die and Gray will do anything to keep Brix from falling ill.  Even work with his mortal enemies.

Together with a Guild Madge, Gray and Brix travel to the place Brix grew up, a place she has not been back to since she was stolen away and sold into slavery as a child.  It becomes increasingly obvious that whatever this plague is, it began here, but how it began and who is controlling its spread is more complicated - and dangerous - than Gray could have believed.

As he uncovers the truth behind the illness, ancient magic is revealed as is the dark secret at the heart of this seemingly innocent town.

The world building in these books is stellar.  I love that magic, while useful, makes the user sick.  The way it is regulated by the Guild and protected for use only by its members is also clever, although Gray is clearly more skilled at its use than the Guild Members.  '

Gray is a fantastic character too.  A lovable rogue who will stop at nothing for those he cares about.  He's a very skilled user of magic, but not entirely in control of the spells he carries under his skin.  Throughout the book he learns more about the magic he holds and learns how to use what he carries with him.

And the creatures are delightful too.  Horrific things stitched together by some madman and set loose upon an unsuspecting town.  Necromancy at its finest kids!

So it goes without saying that I would recommend this one.  It's exciting, fast-paced and full of twists and turns you'll never see coming.

Death is simple. Dreams are dangerous. Life is . . . unexpected.

Outlaw wizard Corcoran Gray expected death to be final, but life, and his loved ones, had other plans. A year after being resurrected and flung into a new body, he's still trying to come to terms with his situation - and his self - when the all-powerful Mages' Guild demands his help to stop a deadly plague.

He's inclined to refuse the organisation that still wants him dead, until his partner Brix starts showing symptoms - to save her, Gray will do anything, even if it means working with his greatest enemies.

But it quickly becomes clear that this is no normal plague. The situation is more complicated, and more lethal, than anyone has realised. Ancient dangers are stirring, and thousands of lives are at stake . . .
Posted by Kate Larkindale at 11:28 AM