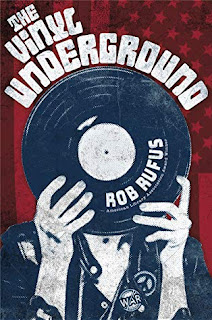 I really enjoyed this piece of historical fiction.  Set in 1968, Ronnie's brother, Bruce,  has recently been killed in Vietnam.  Now he's about to graduate and the draft hangs over him.  Despite having already lost one son to the war, Ronnie's father is determined to see his second son honor the country with his service too.

When Ronnie meets Hana, the new girl who moves in across the street, his thinking begins to change.  She's half-Japanese and faces daily slurs about her race at the still-segregated school they attend in small-town Florida.  Having come from Chicago, Hana has new ideas about the war and justice and many other things Ronnie has never thought about before.

Along with Ronnie's best friend, Milo, and Bruce's best friend Lewis, Ronnie and Hana start up a club, The Vinyl Underground, as a way to share the music all four kid love.  But their weekly meetings become more politically charged as the conversation flows.  Before too long, the group have come up with an audacious plan to keep Ronnie from being drafted.

Things should calm down for Ronnie once the threat of going to war is lifted from his future, but instead, an act of racially charged violence shatters their tight-knit group and together they plan an act of revenge that may just change the lives of their peers forever.

The characters in this book feel very real and complex.  They are children, yet face the very real possibility of being sent to a foreign country to be killed.  How they are expected to go to school and study the heroics of American politicians in the face of this level of terror is beyond me.  This would have been a very real fear at this time, and I loved how creative these characters are in their planning.

I would definitely recommend this one, even if you're not interested in historical fiction.  The themes explored here are just a relevant today.

I received a free copy of this book from NetGalley in exchange for a review, so thanks, NetGalley!

During the tumultuous year of 1968, four teens are drawn together: Ronnie Bingham, who is grieving his brother’s death in Vietnam; Milo, Ronnie’s bookish best friend; “Ramrod,” a star athlete who is secretly avoiding the draft; and Hana, the new girl, a half-Japanese badass rock-n-roller whose presence doesn’t sit well with their segregated high school.

The four outcasts find sanctuary in “The Vinyl Underground,” a record club where they spin music, joke, debate, and escape the stifling norms of their small southern town. But Ronnie’s eighteenth birthday is looming. Together, they hatch a plan to keep Ronnie from being drafted. But when a horrific act of racial-charged violence rocks the gang to their core, they decide it’s time for an epic act of rebellion.
Posted by Kate Larkindale at 12:30 AM