There was a lot I liked about this book, but probably an equal amount I didn't like. 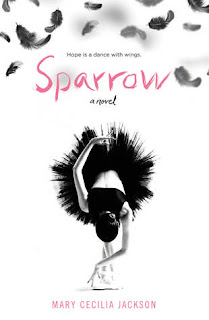 It's about a girl called Sparrow, a talented dancer in a small town who is haunted by her past to a degree that threatens her future.  She gets into a relationship with a handsome player who treats her like crap and starts trying to alienate her from her friends.

In a second POV we get Lucas's story.  Lucas is Sparrow's dance partner and all-around nice guy.  He's also in love with her, so his jealousy and suspicion of the above-mentioned handsome player starts off feeling like sour grapes.

I didn't feel like this was a book that really needed a second POV character, especially since each time Lucas stepped into the story, we were taken back in time so we could see the events of the previous section through his eyes.  This really slowed the book down and seeing the same events again didn't really add much to the story.  And Lucas is far too much the good-guy to be truly interesting.  Even when he gave in to his temper and let his rage out, he still came across as a nice guy.

The other thing I really didn't like about the book was how quickly Sparrow's relationship with Tristan developed.  It didn't really develop,  She met him, they went out, and suddenly they were in a relationship and in love.  I never understood the connection or what made her think he loved her or why she loved him.  Nothing in any of his actions made me believe that.  The thing with abusive relationships is that before they become manipulative and dangerous, there has to be something real and powerful there.  Otherwise no one would stay in one.  Staying is hoping things will go back to being the perfect thing that existed to begin with.

While ballet is obviously important to Sparrow and Lucas, it isn't really a huge part of the book, so if you're looking for a story that delves deep into the ballet world, this isn't the book for you.  This is much more a delve into the psyche of a young woman whose traumatic past has her confused about what love actually looks and feels like.

And as that, it does work on many levels.  There are just a few too many distractions around this core plot, and not enough realistic set up in the early part of the book to sustain the later parts.

Thanks to NetGalley for letting me read this one in advance.
Posted by Kate Larkindale at 12:30 AM