Books I've Read: The Lady's Guide to Petticoats and Piracy 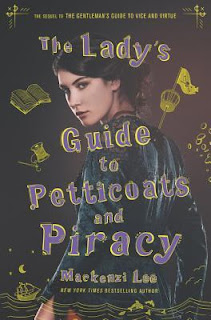 I really enjoyed The Gentleman's Guide to Vice and Virtue, so when I discovered there was a sequel featuring Monty's mouthy little sister, I jumped on it.  And I really enjoyed reading this book.

Felicity is a feisty young heroine, single-minded in her desire to buck the societal norms and become a doctor.  The more she is turned down, the more determined she is to succeed.  The book opens with Felicity in Scotland, working in a bakery after being denied access to any of the medical schools in the area.  The owner of the bakery is smitten with her, but it's only when he proposes and offers her a safe, comfortable life that she flees.

In London, she seeks refuge with her brother Monty and his lover, Percy.  The pair live in a tiny, squalid flat but seem happy there, living their desires out of the public eye.  Felicity arrives like a whirlwind, determined to get a place at a medical school in the city where, surely, people are more enlightened.

Armed with a list of reason why she should be accepted, Felicity lies her way into a meeting with the Board of a school, and pleads her case - unsuccessfully.

One of the doctors takes an interest in her though, and tells her Dr Platt, a physician she has long admired for his radical ideas, is looking for an assistant.  She instantly imagines the work they will do side by side and is determined to take the role.  Unfortunately, Dr Platt is in Germany, preparing for his wedding.

Unfortunately they had a massive falling out several years back and haven't spoken since.

From this point the book becomes a thrilling adventure as Felicity meets up with the mysterious Sim who offers to help her cross to Europe and find Platt.   As the story moves on, it becomes apparent that even the beautiful and seemingly frivolous Johanna has something to hide, and that something is of enormous value to a number of different people.  Many of whom will be willing to kill to get it.

I won't say what that is, because it will ruin the surprise.  And a surprise it was!  This is a meticulously researched book, with plenty of delightful period details.  So when I discovered what it was everyone was seeking, it threw me a little.  I don't expect historical fiction to veer into fantasy so late in the piece.

But overall, this was an very enjoyable book, even if Felicity could be a bit much to take at times.  She's brave, impulsive and fiery, but sometimes too much of that makes someone rather unpleasant to be around.  I totally understood Johanna's pushing her away.  I probably would have too...

In this highly anticipated sequel to the New York Times bestselling The Gentleman’s Guide to Vice and Virtue, Felicity Montague must use all her womanly wits and wiles to achieve her dreams of becoming a doctor—even if she has to scheme her way across Europe to do it. A must-have for fans of Mackenzi Lee’s extraordinary and Stonewall Honor-winning novel.

A year after an accidentally whirlwind grand tour with her brother Monty, Felicity Montague has returned to England with two goals in mind—avoid the marriage proposal of a lovestruck suitor from Edinburgh and enroll in medical school. However, her intellect and passion will never be enough in the eyes of the administrators, who see men as the sole guardians of science.

But then a window of opportunity opens—a doctor she idolizes is marrying an old friend of hers in Germany. Felicity believes if she could meet this man he could change her future, but she has no money of her own to make the trip. Luckily, a mysterious young woman is willing to pay Felicity’s way, so long as she’s allowed to travel with Felicity disguised as her maid.

In spite of her suspicions, Felicity agrees, but once the girl’s true motives are revealed, Felicity becomes part of a perilous quest that leads them from the German countryside to the promenades of Zurich to secrets lurking beneath the Atlantic.
Posted by Kate Larkindale at 10:42 AM