Books I've Loved: Everything Leads to You 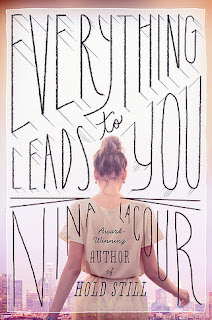 I enjoyed this book a lot despite feeling the whole way through that Emi was far too young to be given the level of responsibility she's given on the movie sets.  I just put her age on the back-burner and enjoyed the story for all its twists and turns and very real details of working on independent films.

I loved the Hollywood setting and the way the book contrasted the big budget film sets of the studio with the micro-budget indie film Emi went on to work on.  It was a perfect parallel to the difference between Ava's life in a homeless shelter and Emi's privileged upbringing.

And did I mention the romance?  It's super sweet.  Emi is just getting over a rather toxic relationship with a woman who works with here when she meets Ava, so the romance moves slowly.  Ava has her own problems so the romance unfolds realistically.

The other thing I liked was the focus on friendship.  Again, Charlotte seems too young to have the job she has, but her loyalty to Emi and her determination to find Ava were very real.

But don't just believe me...  Here's the blurb:

A wunderkind young set designer, Emi has already started to find her way in the competitive Hollywood film world.

Emi is a film buff and a true romantic, but her real-life relationships are a mess. She has desperately gone back to the same girl too many times to mention. But then a mysterious letter from a silver screen legend leads Emi to Ava. Ava is unlike anyone Emi has ever met. She has a tumultuous, not-so-glamorous past, and lives an unconventional life. She’s enigmatic…. She’s beautiful. And she is about to expand Emi’s understanding of family, acceptance, and true romance.
Posted by Kate Larkindale at 9:41 AM