I was lucky enough to get an advance copy of Allyson Lindt's new book to review!  So here goes.... 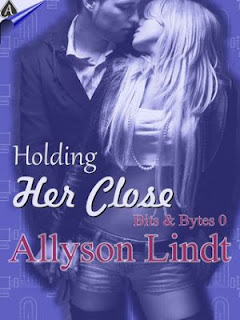 Zach and Rae were high school sweethearts.  Since their explosive breakup, they’ve avoided one another – something that has been difficult since Rae’s best friend, Scott, is Zach’s business partner.

Now Scott and Zach are in the midst of a crisis as their successful gaming company is undergoing a hostile takeover.  When Rae walks into the mess, suddenly neither she nor Zach can keep their minds off each other.

Zach proposes a one nigh fling to get it out of their system.  Rae agrees, but the sex is better than either of them had ever dreamed it could be, and soon, “just this once”, has become “just one more time.”

Complicating matters is the fact Rae thinks she knows how to fix the business problems both men are having.  Scott is willing to listen, but Zach refuses even to open an ear to her.

This is a hot romance with some of the steamiest sex scenes I’ve read in a contemporary romance novel.  But there’s a lot more to this book than just sex.  The characters are layered and nuanced, growing and changing through the experiences they deal with through the novel.  To begin with I thought Zach was an arrogant ass and was sorry to see Rae fall for his lines, but as the novel progresses, what makes Zach tick becomes clearer and his behavior is completely understandable.

The idea that these two have been holding a torch for each other for over ten years lends urgency to the proceedings.  Neither will be able to move on as long as the other remains tantalizingly nearby.  So the stakes in this relationship are already sky high.

Lindt obviously knows the world her characters inhabit well, and offers cubicle dwellers a chance to indulge their own fantasies of sex on a boardroom table or in an alcove away from a buzzing conference.

Fast paced, sexy and easy to relate to, Holding Her Close is a must for any office worker who thinks romance can’t happen in the workplace.
Posted by Kate Larkindale at 11:48 AM