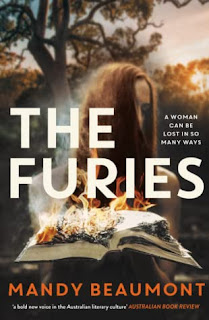 This was a strange and quite disturbing read. Even now I'm not 100% sure I actually liked it or not, but it certainly left an impression.

Set in the outback in Queensland, Cynthia has not had an easy life up until now. Living so remotely she has little company other than her parents and sister and her father is often gone for work. The isolation and the hardship the family endures after years of drought have to take a toll.

The book starts just after that toll has left Cynthia alone. Her mother is gone after an horrific act of madness and her father flees the scene just months later. Left with no one and nothing, Cynthia has to take job at the only nearby place where work is available - the meat works.

As a lone woman in this very male environment, Cynthia is subjected to any number of indignities. Initially she rolls with it, feeling that this is a woman's role. But after a while, her sister seems to whisper to her from beyond the grave and with her, the voices of other women who are no longer with us.

Cynthia grapples with her past while she tries to forge a future for herself that will be better than the one she saw her mother suffer through and so what actually happened to bring Cynthia to this place is revealed slowly throughout the book.

Everything about this book was a little off, from the language to the extreme weather to the casual brutishness of almost all the men in the town. I wanted to feel sorry for Cynthia for everything she suffered through, but it was difficult to care for her when every choice she made seemed wrong. There is a hint of madness surrounding all the characters in this story, which made reading the book a little like trying to walk on sand - slippery and uncertain.

The language didn't help. Sentences stopped and started in random places which annoyed me and made me conscious of the writing. I know it was intentional, but it drew me out of the story every time. Perhaps that was intentional too. To give you time to reflect on the book's themes.

I'm not sure I liked this book, to be honest. But it was certainly memorable and had a lot to say about a woman's place in society and her value (or lack of it)

Defiant, ferocious and unyielding - The Furies is a unique and breathtakingly powerful debut novel from Mandy Beaumont. For those who love Charlotte Wood, Margaret Atwood and Carmen Maria Machado.Cynthia was just about to turn sixteen when the unthinkable happened. Her mother was taken away by the police, and her father left without a word three months later. After that night, Cynthia began to walk in slow circles outside the family home looking for traces of her sister Mallory - she's sure that she must be somewhere else now, wherever that is.

Cynthia knows that she doesn't belong here. Her mother never belonged here either. This is the place of violence. Despair. The long dry. Blood caked under the nails. Desperate men. Long silences. The place where mothers go mad in locked bedrooms, where women like Cynthia imagine better futures.

As a threatening wind begins to dry-whirl around her, seldom seen black clouds form above, roll over the golden-brown land - is that Mallory she can hear in the growling mass? In the harsh drought-stricken landscape of outback Queensland a woman can be lost in so many ways. The question is, will Cynthia be one of them?

Defiant, ferocious and unyielding - The Furies is a debut novel by Mandy Beaumont that explores the isolation felt by so many women, and how powerful we can be when we join together. It puts her firmly on the literary map, blazing forth from the terrain of Charlotte Wood, Margaret Atwood and Carmen Maria Machado, with a unique and breathtaking power.
Posted by Kate Larkindale at 9:27 AM