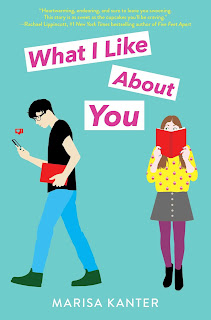 This is a quick, fun read that I tore through in a weekend.  It has some Jewish representation in it too, something that I don't often see in YA books I read.

When Halle moves in with her grandfather for a year to concentrate on her online life and college applications while her parents head to Israel to make (another) documentary, she can't believe the house is the same one her grandmother once lived in.  All traces of her beloved Gran are gone.  What's more, her grandfather is a shell of the man he once was.

All the more reason to escape into the online world she's built over the years, the one where she isn't socially awkward, book-nerd Halle but smart, savvy and popular book blogger, Kels.  Online Halle has a group of friends including her bestie, Nash, a talented cartoonist with whom she shares a burning desire to get into NYU.

So when Halle runs into Nash at the library in her new hometown, she's flummoxed.  Her online life and her real life aren't supposed to meet.  Not yet, anyway. Maybe in college...  But in this small town, being the new kid makes you conspicuous and Halle is quickly absorbed into Nash's friend group.  And the more time she spends with them, the harder it is to admit that she, super-awkward and shy, is actually Kels.

As her online life becomes more and more successful, it becomes harder and harder for her to keep her secret.  Especially once she and Nash get close in real life.  The only problem is that Nash is secretly in love with Kels...  But how can Halle tell him the truth now?

I loved that this was essentially a love triangle, but the third person was just another side of Halle.  I also really liked the behind-the-scenes look at the book blogging scene.  I know I blog about books, but publicists are not exactly beating down my door to send me ARCs or asking me to do cover reveals for hot new titles.

I also liked that Halle's family were Jewish, but didn't really practice, while her grandfather and new friends did.  Practicing Jews aren't something I see a lot of in YA books, so this was refreshing.  I've actually read more about Muslim and Hindi families than about Jewish ones, to be honest.  Interesting...

I'd recommend this one if you're looking for a light, breezy romance.  It doesn't do anything particularly out of the ordinary, but it is enjoyable.  You may want to make yourself a batch of cupcakes before you start because the descriptions of Halle's cakes made my stomach growl!

Can a love triangle have only two people in it? Online, it can... but in the real world, it's more complicated. In this debut novel Marisa Kanter explores what happens when internet friends turn into IRL crushes.

There are a million things that Halle Levitt likes about her online best friend, Nash.

He’s an incredibly talented graphic novelist. He loves books almost as much as she does. And she never has to deal with the awkwardness of seeing him in real life. They can talk about anything…

Except who she really is.

Because online, Halle isn’t Halle—she’s Kels, the enigmatically cool creator of One True Pastry, a YA book blog that pairs epic custom cupcakes with covers and reviews. Kels has everything Halle doesn’t: friends, a growing platform, tons of confidence, and Nash.

That is, until Halle arrives to spend senior year in Gramps’s small town and finds herself face-to-face with real, human, not-behind-a-screen Nash. Nash, who is somehow everywhere she goes—in her classes, at the bakery, even at synagogue.

Nash who has no idea she’s actually Kels.

If Halle tells him who she is, it will ruin the non-awkward magic of their digital friendship. Not telling him though, means it can never be anything more. Because while she starts to fall for Nash as Halle…he’s in love with Kels.

Posted by Kate Larkindale at 9:00 AM