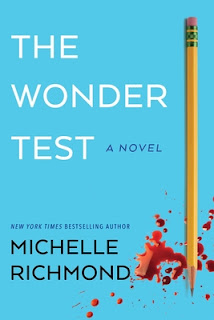 I read this over the weekend, in between films and household chores and really enjoyed it.

It's set in a small California town near San Francisco where everyone seems to be extraordinarily affluent.  Lina and her son Rory move there from New York following the death of Lina's husband and father.  Ostensibly there to clean out her father's house, Lina is actually trying to escape both her grief and her guilt over a mistake she made in her work as an FBI agent.

Everything seems idyllic at first.  The house is gorgeous, the neighbourhood quiet and safe and Rory's new school top-notch.  Although Lina does think it's odd how involved the community is with the school and fact the students are expected to do one single, all encompassing test - the Wonder Test.  Nothing about this test and the devotion of the community to it seems quite right to Lina and her well-honed investigative skills start prickling.

It's not long before Lina discovers that a student at the school went missing last year, only to be returned mysteriously just after test week.  Further investigation reveals that a similar thing happened the year before.  So when Rory's new girlfriend disappears, Lina recognises the link and dives headfirst into an investigation that will take her on a journey through the values of Silicone Valley's elite, the real estate market and the secret world of pony fetishists.

The details about Lina's work were fascinating and felt authentic although never having been an FBI agent, I don't know for sure.  The things she knew and did felt right though, even if that is because I've watched too many spy movies over the years...

This is a pacey read with enough twists and turns to keep you turning the pages to find out what happens next.  I enjoyed the social commentary about these elite people and the way they live through the achievements of their children, not to mention the relationship between high test scores and increased real estate value.  Sometimes I have to wonder about peoples' priorities!

If you like a good thriller with authentic details and a bit of scathing social commentary, I'd recommend this one.

A widowed FBI agent grows suspicious of her son's new school in this thriller by the New York Times bestselling author of The Marriage Pact.


Lina is on leave from her job in New York at the FBI in order to clean out her father's home in Silicon Valley. As though letting go of her father isn't hard enough, Lina has also recently lost her husband in a freak traffic accident. Still reeling, she and her teenage son Rory must make their way through this strange new town and the high school around which it all seems to revolve. Rory soon starts coming home with reports of the upcoming "Wonder Test," a general aptitude assessment that appears increasingly inane, and Lina is shaken out of her grief by a sense that something is amiss in Hillsborough.

When she discovers that a student disappeared last year and was found weeks later walking on a beach, shaved and traumatized, Lina can't help but be sucked into an impromptu investigation. Another kidnapping hits closer to home and reveals a sinister link between the Wonder Test and the rampant wealth of Silicon Valley's elite. A searing view of a culture that puts the wellbeing of children at risk for advancement and prestige, and a captivating story of the lengths a mother will go for her son, this is The Wonder Test.
Posted by Kate Larkindale at 9:00 AM