Books I've Read: In the Time of the Manaroans 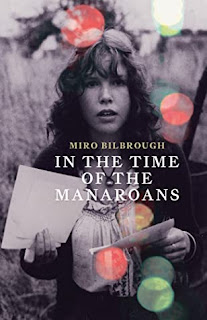 For some reason I seem to have picked up a lot of memoirs lately and this was one of them, loaned to me from a friend.  I was interested in it because Canvastown is a place we drive through on our way to Kaiteriteri every year, and I never suspected that it was a hotbed of hippy activity in the 70s.

I wish I could say I enjoyed this book, but I really didn't.  I never felt any connection to the narrator or any emotion about anything that happened to her.  The book is written in a way that keeps the reader at a remove, telling us about the events of her life rather than drawing us in and showing them.

Some pretty awful things happen to this poor teenager as she moves from place to place, struggling to get an education and to find a place in the world to call her own.  Yet I never felt any emotions about any of these events.  Unwanted sex with older men is written about in much the same way as painting a caravan.  It's all very beautiful and lyrical, but the language doesn't allow the reader in.

The characters in this story are fairly well drawn, but there is a kind of sameness about them.  For people who professs to care passionately about changing the world, they seem remarkably selfish, focused solely on their own personal journeys and desires.  It seems incredible to me that not one of these people did anything much to ensure these young people living among them were taken care of.

For anyone who has ever imagined hippy life as being free and easy, this book will bring that illusion crashing down.  The hippy world described here is one of poverty and hard work.  Just getting a cup of tea made in the Manaroan commune is a task that will take most of the morning.  Living off the land isn't easy when the land you're living on is unforgiving.

While I didn't particularly enjoy this book, I'm glad I read it.  It gave me insight into a world I was only vaguely aware existed in my own country.  I just wish the author had given more of herself in this memoir as I think it would have been far more impactful if we'd been allowed more deeply into her thoughts and feelings about the places and events described.

At fourteen Miro Bilbrough falls out with the communist grandmother who has raised her since she was seven, and is sent to live with her father and his rural-hippy friends. It is 1978, Canvastown, New Zealand, and the Floodhouse is a dwelling of pre-industrial gifts and deficiencies set on the banks of the Wakamarina River, which routinely invades its rooms.

Isolated in rural poverty, the lives of Miro and her father and sister are radically enhanced by the Manaroans—charismatic hippies who use their house as a crash pad on journeys to and from a commune in a remote corner of the Marlborough Sounds. Arriving by power of thumb, horseback and hooped canvas caravan, John of Saratoga, Eddie Fox, Jewels and company set about rearranging the lives and consciousness of the blasted family unit.

In the Time of the Manaroans brilliantly captures a largely unwritten historical culture, the Antipodean incarnation of the Back to the Land movement. Contrarian, idealistic, sexually opportunistic and self-mythologising too, this was a movement, as the narrator duly discovers, not conceived with adolescents in mind.
Posted by Kate Larkindale at 11:26 AM