Books I've Read: Above All Else 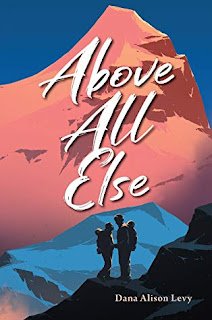 I've never climbed Mount Everest.  I've never wanted to.  But I can understand wanting to push yourself to do something like that, something so extreme and so dangerous its more about proving to yourself you can do it than anything else.

Tate and Rose have spent their entire lives climbing together, encouraged by Rose's mother and Tate's father who are both keen climbers.  For years now, their focus has been on Everest and they have trained and fundraised and done everything they could to get there.

But now that the trip is actually happening, neither Tate nor Rose are as excited or as focused as they need to be to meet the challenge.  Rose's mother is ill and couldn't accompany them to Nepal, leaving Rose feeling like she's missing a limb or something, while Tate's hiding a new terror of climbing he's developed since a nasty fall a few months back and pushing back when his father nags at him about failing to live up to his expectations.

And to complicate things even further, it appears that after all these years of being just friends, their relationship is changing, moving toward being the romance their friends always assumed they were already embroiled in.

With the mountain's summit growing closer and the challenges of climbing it with limited oxygen become more apparent, each of these climbers is going to need to dig deep to find their own strength and reason to keep going.

I enjoyed this book because it really brought home just how dangerous and how difficult it is to climb Everest.  The characters were real and flawed and the romance between Tate and Rose felt like it grew organically.

I particularly liked the detail about climbing and the way you prepare for something like summiting Everest and the care and attention the Sherpas put into ensuring their climbers make it through the experience.

If you're interested in climbing, or maybe, like me, don't know much about it, this might just be the book for you.  Thank you to NetGalley for letting me read it in advance.


In a fictional tale as riveting, irresistible, and heartbreaking as Into Thin Air, teen climbing prodigies Rose and Tate attempt to summit—and survive—Mount Everest.

Rose Keller and Tate Russo have been climbing for years, training in harsh weather and traveling all over the world. The goal that kept them going: summiting Mount Everest, the highest point on earth. Accompanied by Tate’s dad, the two will finally make the ultimate climb at the end of their senior year. But neither Rose nor Tate are fully in the game—not only is there a simmering romance between them, but Rose can’t get her mind off her mother’s illness, while Tate constantly fails to live up to his ambitious father’s standards.

Everyone on their expedition has something to prove, it seems. And not everyone is making the best decisions while short on oxygen and physically and mentally exhausted. The farther up the mountain they go, the more their climbing plans unravel and the more isolated each team member becomes. Rose and Tate will have to dig deep within themselves to determine what—or who—they value above all else.
Posted by Kate Larkindale at 12:30 AM