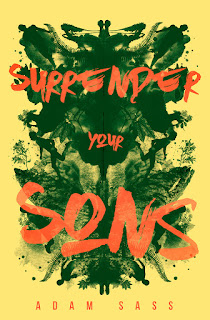 This is one of those books I really wish I enjoyed more.  The premise is fantastic - part Lord of the Flies and part The Miseducation of Cameron Post - but it didn't quite work for me.

Connor lives in a small rural town with his religious zealot mother.  He's gay and has a boyfriend for the first time.  His boyfriend comes from a very supportive family who embraced his coming out without reservation.  Connor is pretty sure his own mother won't be so accepting, but Ario encourages him to stop sneaking around and to tell his mother.

As Connor predicted, it doesn't go well and Connor finds himself on lockdown, allowed out of the house only to help the Reverend deliver meals on wheels.  And there's something weird about the Reverend, and not just the thrall he seems to have the entire town under, especially Conner's mother.  It seems to have something to do with one of the meals on wheels customers, a severely handicapped guy called Ricky.

Then Ricky dies and Connor is dragged from his home by burly guys who claim to be taking him to a summer camp.  The only clue is a note Ricky left in the pages of an old theatre program.

The summer camp turns out to be a conversion camp on a remote island in Costa Rica.  And it's run by none other than the Reverend.  Connor needs to figure out why Ricky wrote the name of this camp on the program he left and what his link is to both the camp and the Reverend before it's too late.

There was lots to like about this story about kids taking justice into their own hands in order to escape a horrendous experience.  There were moments of high adventure and excitement and moments of quite tender romance.  But overall, I felt like there was a little too much going on.  It was difficult to understand why Connor was so invested in Ricky's past when he didn't seem to know him very well, and cared about him less.

The writing itself was often overblown which drew me out of the story because the language didn't feel like Connor's language, the descriptions unlike something a teenage boy would observe.

The other campers were not well-drawn and were defined almost exclusively through the way they looked.  Female campers were given particularly little definition apart from feisty Molly, the girl Connor arrives on the island with.

If you're a fan of action and adventure and kids taking the law into their own hands, this might be a book for you.

Thanks to NetGalley for letting me read it in advance.

Connor Major’s summer break is turning into a nightmare.

His SAT scores bombed, the old man he delivers meals to died, and when he came out to his religious zealot mother, she had him kidnapped and shipped off to a secluded island. His final destination: Nightlight Ministries, a conversion therapy camp that will be his new home until he “changes.”

But Connor’s troubles are only beginning. At Nightlight, everyone has something to hide from the campers to the “converted” staff and cagey camp director, and it quickly becomes clear that no one is safe. Connor plans to escape and bring the other kidnapped teens with him. But first, he’s exposing the camp’s horrible truths for what they are— and taking this place down.
Posted by Kate Larkindale at 12:30 AM