Books I've Loved: How to Make Friends with the Dark 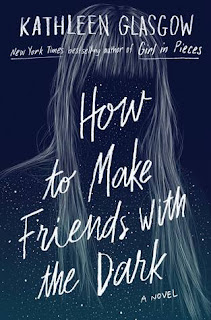 It's been a long time since I had a book hangover, but this book has been haunting me since I finished it on Sunday.

Anyway, I found it very powerful and as I said, have been thinking about it for days.

Tiger and her mother had a very close relationship.  Maybe too close.  I felt like Tiger's mother clung too tightly to Tiger, was too protective of her.  And of course, as a teenager, Tiger wanted to be free.

But how do you deal with it when your first taste of rebellion ends with your mother dropping dead suddenly and unexpectedly, before you have a chance to apologise for the words you tossed out in the middle of fight?

This is what Tiger has to reconcile.  Alongside the fact she and her mother have always been alone together, no other family around for support.

As she struggles to negotiate a world without her mother, and the guilt over the last words she spoke to her, Tiger also has to deal with foster care and a string of new homes with new rules and new people in them.

The only constant is her best friend, Cake.  But when she overhears a conversation between Cake's parents, Tiger knows she needs to stop clinging to Cake like the only piece of flotsam in a storm-tossed sea.

This is definitely not a cheerful book.  Tiger's problems only get worse once she discovers who her father is and that she has an older half-sister who grudgingly agrees to be her caregiver.  The kids in her school-sanctioned Grief Group help a bit - they understand at least - but they don't stop Tiger from making some very bad choices.

Tiger is kind of an annoying character, but somehow it didn't bother me in this book where it probably would have in another. She's so innocent, but I think that's partly because of how much her mother sheltered her from life's cruelty.  She's very passive in many ways, but the overwhelming nature of everything being thrown her way makes this lack of agency feel realistic, rather than pathetic.  She really does have no control over the situations she finds herself in.

I also liked that her friendship with Thaddeus, the foster brother she lives with briefly, remains a friendship.  So often relationships like this in YA end up becoming romantic, and I liked that this time it stayed platonic, even as the two of them supported each other.

This is not necessarily an easy read.  If you've lost someone close to you it will probably feel very raw.  I know it brought up a lot of feelings in me I thought I had long-buried.  And it may not be accurate to the way everyone experiences grief - it's a personal thing that everyone feels and deals with differently.

But I feel like this was an accurate and heartfelt representation of this character's grief and how she responded to not just the loss of her mother, but the loss of life as she knew it before.  At one point Tiger comments that she wishes there was a manifesto to tell her how to navigate through the grief she's feeling.  This is not that manifesto; it's just one girl's experience.

Don't just listen to me, though.  Here's the blurb:

Here is what happens when your mother dies.

It’s the brightest day of summer and it’s dark outside. It’s dark in your house, dark in your room, and dark in your heart. You feel like the darkness is going to split you apart.

That’s how it feels for Tiger. It’s always been Tiger and her mother against the world. Then, on a day like any other, Tiger’s mother dies. And now it’s Tiger, alone.

Here is how you learn to make friends with the dark.
Posted by Kate Larkindale at 12:30 AM