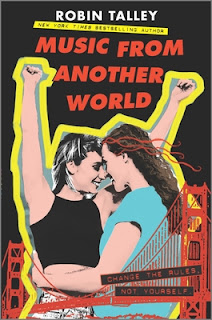 I'm not usually a huge fan of books that tell their stories through letters or diary entries, but I really liked this one.

Set in 1977, two girls from very different backgrounds, both at religious schools, are matched as pen - pals for a summer assignment.  Initially cautious with one another, they soon discover a mutual love of punk music and begin to open up to one another, one careful secret after another.

Tammy lives in the shadow of her ultra-conservative aunt's church and is constantly forced to take part in canvassing and campaigns that fly in the face of her own feelings and beliefs.  The only place Tammy can express herself is her diary where she writes long, impassioned letters to her hero, openly gay activist Harvey Milk. She longs for the day she can finally be her true self .

Sharon lives in San Francisco but her strict Catholic neighborhood feels miles away from the freedoms and self-expression of the Castro and Harvey Milk's campaigns.  She feels trapped in her life, helping her brother hide his gayness from their mother and pretending to be the good girl everyone expects her to be.   Her discovery of punk leads to meeting women with minds more open than that of her mother or the nuns at school. Her letters to Tammy begin to feel as freeing as writing in her diary.

When Tammy accidentally sends pages from her diary to Sharon, things begin to spiral out of control for both girls and by the end of the summer, neither will be going back to the life they thought they would be trapped in until college or beyond.

Set against the very real and very frightening politics of the period, this book felt very real to me.  Some of the letters and diary entries felt like ones I might have written when I was sixteen or seventeen (albeit 10 years later than the period this book is set).

So even if you don't usually like books written in the form of letters and/or diary entries, I'd recommend this one.

It’s summer 1977 and closeted lesbian Tammy Larson can’t be herself anywhere. Not at her strict Christian high school, not at her conservative Orange County church and certainly not at home, where her ultrareligious aunt relentlessly organizes antigay political campaigns. Tammy’s only outlet is writing secret letters in her diary to gay civil rights activist Harvey Milk…until she’s matched with a real-life pen pal who changes everything.

Sharon Hawkins bonds with Tammy over punk music and carefully shared secrets, and soon their letters become the one place she can be honest. The rest of her life in San Francisco is full of lies. The kind she tells for others—like helping her gay brother hide the truth from their mom—and the kind she tells herself. But as antigay fervor in America reaches a frightening new pitch, Sharon and Tammy must rely on their long-distance friendship to discover their deeply personal truths, what they’ll stand for…and who they’ll rise against.

A master of award-winning queer historical fiction, New York Times bestselling author Robin Talley once again brings to life with heart and vivid detail an emotionally captivating story about the lives of two teen girls living in an age when just being yourself was an incredible act of bravery.
Posted by Kate Larkindale at 12:30 AM