Books I've Read: The Sky Is Mine 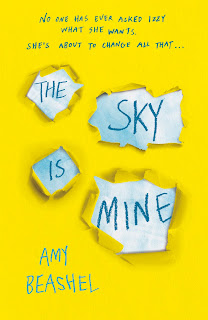 I have really mixed feelings about this book. It deals with some really complex and relevant issues that need to be discussed. But I feel like it tries to cover too much for a single book and every one of the issues gets a little short changed as a result.

The central character is Izzy, and as the book begins, she's dealing with the fallout from a party where she got drunk, had sex with a guy she didn't like much who then shared photos of her in a compromising position all over their school. He claims to have more photos and says he'll share them if she doesn't continue to be at his beck and call.

To complicate things further, just getting out of her house is a challenge thanks to the man her mother married a few years back. A man who is both verbally and physically abusive to both Izzy and her mother. He's controlling and has them both so terrified they tend to jump when he says to, just to keep the peace.

And it doesn't help that Izzy's best friend has fallen in love and is far more interested in finding ways to spend time with her girlfriend than in hearing about Izzy's problems.

I thought this book was really well written. Some of the descriptions were beautiful, unusual and really evocative. I just felt like it was trying to cover too much ground, something that became even more apparent as I reached the end of the book and so many different threads needed to be tied up. Compared to the pace in the rest of the book, the ending felt rushed and wasn't as satisfying as I was hoping for as a result.

I think books like this are really important because they can start a conversation about things that are difficult to talk about. I just wish this one had focused on fewer issues because none of them really got enough room to breathe before being crowded out by another, competing issue.

Thanks to NetGalley for letting me read this in advance.

No one has ever asked Izzy what she wants. She's about to change all that...

In a house adept at sweeping problems under the carpet, seventeen-year-old Izzy feels silenced. As her safety grows uncertain, Izzy know three things for sure. She knows not to tell her mother that Jacob Mansfield has been threatening to spread those kinds of photos around college. She knows to quiet the grief that she's been abandoned by her best friend Grace. And, seeing her mother conceal the truth of her stepdad's control, Izzy also knows not to mention how her heart splinters and her stomach churns whenever he enters a room.

When the flimsy fabric of their life starts to unravel, Izzy and her mum must find their way out of the silence and use the power in their voices to rediscover their worth.

For fans of Sara Barnard, Louise O’Neill and E. Lockhart, The Sky is Mine is a powerful exploration of rape culture and domestic abuse, and a moving story of women learning to love themselves enough to demand to be heard.
Posted by Kate Larkindale at 2:38 PM