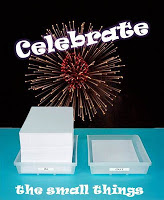 This post is part of Lexa Cain's blog hop, Celebrate the small things. Head on over there to sign up!

It's been a long week at work and I'm looking forward to a couple of days off.  Especially since the burger festival continues and I have a date with my other son to try a different one.  Last week's wasn't fabulous, so fingers crossed this one is better.

One of my colleagues is DJ-ing at a local cafe/bar tomorrow afternoon, so I'm going to meet up with some friends for that, and then I'm going to see Justin Townes Earl play.

So a busy weekend planned!

I had an idea for a new book this week.  Well, actually, it isn't an entirely new idea.  I initially conceived of this idea more than 10 years ago, but when I started working through it, I got stuck on why these two characters had the relationship they have and I ended up writing an entire novel about that.  A YA novel.  Now I feel like I'm ready to write the story I initially planned to write which is about those characters about 15 years later.  My first novel for grown ups!  Not sure how I feel about that, but the story is itching to be told.  I'm just not entirely sure who my POV character is going to be...  I'm sure it will become clear to me over the next little while though.  I won't start writing until I find the voice I need.

Posted by Kate Larkindale at 11:25 AM