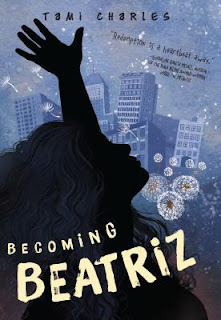 I really wanted to like this book more than I did. The subject matter is important and it's a glimpse into a world I haven't seen often in a book.

Beatriz is fifteen. It's 1984 and she loves the TV show Fame and dancing. Then one day, her brother is killed in front of her, a victim of gang violence that plagues the New Jersey neighborhood where she lives.

Now Beatriz has more to worry about than dancing. Her mother is largely catatonic with grief and Beatriz is expected to pick up the reins in terms of leading the gang in its next move against their Haitian rivals and keeping its lucrative drug dealing business running. Things become even more complicated when she meets Nasser, the nerdy new student at school who encourages her to take dance classes with him and tutors her in math so she might pass her classes for once this year.

I didn't realize until after I finished this book that it was a sequel or companion book to another, but it doesn't matter. The story stands alone.

Beatriz is an interesting character. In many ways she's terribly naive, but in others she seems older than her age. Which, given the life she's living, is appropriate. Her voice is authentic, a mixture of street-smart English and her native Spanish sprinkled through it. Her love of dancing is clear, and the parts of the book where she dances are the ones where the book really springs to life.

Other parts of the story don't work so well. Beatriz never feels real when she's with the gang. She never gives any real sense of the loyalty required to not just be in a gang, but to lead it. She doesn't seem to really like her gang-member friends, or behave in a way that would inspire them to follow her.

Her relationship with Nasser also doesn't ring entirely true. He's one of those too-good-to-be-true guys who doesn't give up pursuing and loving her even when she rebuffs him time and time again. She never shares anything of herself with him and their relationship seems very unequal. I don't believe a smart, strong person like Nasser would continue chasing after Beatriz after she'd shot him down that many times. Teenage boys don't have that kind of self-confidence, and Beatriz really doesn't seem like she's a real catch anyway.

That said, this is an interesting look at a culture and a world and a time that is very different to the one I grew up in.

Thanks to NetGalley for giving me the chance to read this in advance.

Beatriz dreams of a life spent dancing--until tragedy on the day of her quinceañera changes everything.

Up until her fifteenth birthday, the most important thing in the world to Beatriz Mendez had been her dream of becoming a professional dancer and getting herself and her family far from the gang life that defined their days--that and meeting her dance idol Debbie Allen on the set of her favorite TV show, Fame. But after the latest battle in a constant turf war leaves her gang leader brother, Junito, dead and her mother grieving, Beatriz has a new set of priorities. How is she supposed to feel the rhythm when her gang needs running, when her mami can't brush her own teeth, and when the last thing she can remember of her old self is dancing with her brother, followed by running and gunshots? When the class brainiac reminds Beatriz of her love of the dance floor, her banished dreams sneak back in. Now the only question is: will the gang let her go?

Set in New Jersey in 1984, Beatriz's story is a timeless one of a teenager's navigation of romance, gang culture, and her own family's hard past. A companion novel to the much-lauded Like Vanessa.
Posted by Kate Larkindale at 12:30 AM