Books I've Read: If I Ever Get Out of Here 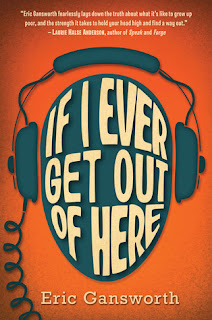 I haven't had much luck with the books I've chosen recently, and nothing has really stood out as being outstanding in the past few weeks.  Perhaps it's my mood or something, or maybe I really haven't chosen well at the library.  Either way, this was the best of the five books I picked up at my last library visit.

I enjoyed the fact the book was completely frank about living in poverty.  It's something you don't see very often in YA books where kids so often seem to be either super-wealthy, or at least comfortably middle class.  Lewis's unwillingness to let his new friend see his situation was very realistic.

I also liked that Lewis had always been an outsider, that finding a friend was a new experience for him.  At least a friend who wasn't forced into friendship with him by living on the reservation. This friendship grows out of a mutual passion for music, as so many friendships do.  I loved the way these two boys were so serious about their records.  It reminded me of being thirteen or fourteen and scouring record stores for albums that I would take home and lift from their sleeves with as much care as a first-time mother uses when picking up her baby.

It's also a book about bullying, and the helplessness someone being bullied can experience.  Especially when the person being bullied does reach out for help, but doesn't find it.

Lewis is an engaging protagonist and I enjoyed spending time with him.  I felt for him when he first visited George's house and realized he would never be able to invite his friend over to his house.  Keeping a secret like that is never good for a friendship, but family loyalty is often just as important.

So while I wouldn't rave about this book, it's an interesting read and there are some very important issues touched on.

Lewis "Shoe" Blake is used to the joys and difficulties of life on the Tuscarora Indian reservation in 1975: the joking, the Fireball games, the snow blowing through his roof. What he's not used to is white people being nice to him -- people like George Haddonfield, whose family recently moved to town with the Air Force. As the boys connect through their mutual passion for music, especially the Beatles, Lewis has to lie more and more to hide the reality of his family's poverty from George. He also has to deal with the vicious Evan Reininger, who makes Lewis the special target of his wrath. But when everyone else is on Evan's side, how can he be defeated? And if George finds out the truth about Lewis's home -- will he still be his friend?

Acclaimed adult author Eric Gansworth makes his YA debut with this wry and powerful novel about friendship, memory, and the joy of rock 'n' roll.
Posted by Kate Larkindale at 10:39 AM