Books I've loved: Not After Everything 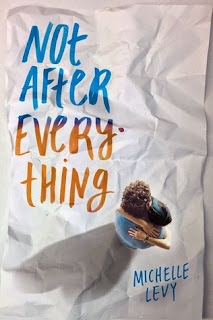 I just finished this one over the weekend and it's still lurking around in my brain.  The story isn't a particularly new one - a boy loses his mother and pushes everyone else away in fear of having to deal with the pain of losing someone else, only to find happiness and love again with a misfit girl.  But this book does that story really, really well.

The characters are well drawn and real.  Tyler is vulnerable and proud and angry and confused.  He blames himself and the fact he put his football career above everything else for his mother's death.  He takes his father's abuse because he feels like he deserves the punishment. That, and he's afraid of being put into a foster home if he lets anyone know how bad it is.

Jordyn's life, in comparison, looks easy.  Loving parents, even if they are divorced, a great step-dad with a cool job that offers her employment too, talent and a bright future.  But this veneer of perfection is just that - a veneer.  Underneath, Jordyn is hurting too.  Maybe not as much as Tyler, but still...

The way this couple come together feels right.  It's not insta-love.  Both of them have to work to make the relationship happen.  And once things do start happening, it's not a smooth and easy road.


Tyler has a football scholarship to Stanford, a hot girlfriend, and a reliable army of friends to party with. Then his mom kills herself. And Tyler lets it all go. Now he needs to dodge what his dad is offering (verbal tirades and abuse) and earn what his dad isn’t (money). Tyler finds a job that crashes him into Jordyn, his former childhood friend turned angry-loner goth-girl. She brings Tyler an unexpected reprieve from the never-ending pity party his life has become. How could he not fall for her? But with his dad more brutally unpredictable than ever, Tyler knows he can’t risk bringing Jordyn too deeply into the chaos. So when violence rocks his world again, will it be Jordyn who shows him the way to a hopeful future? Or after everything, will Tyler have to find it in himself?
Posted by Kate Larkindale at 11:34 AM