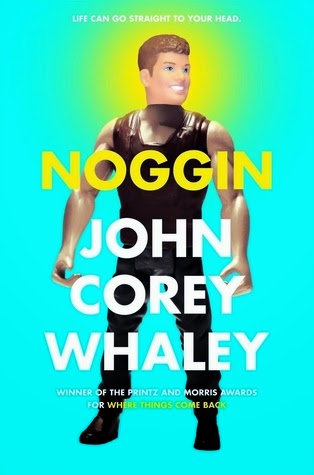 This is another of those books that completely delighted me, although it's very different to my usual taste.  It's imaginative, painful- often uncomfortably so - but also extremely funny.

The premise is simple.  A guy with terminal cancer has his head cryogenically frozen so if medical technology becomes advanced enough to unite it with a new body, he gets a chance to live again.  What he wasn't expecting is that technology arrives only five years after he 'died'.

So the world Travis re-emerges into isn't that different to the one he left.  But when you're sixteen, five years is a long time and he finds it difficult to cope with a world where his girlfriend is now an older woman (and with someone else) an his best friend has moved on without him.

This is an odd, charming and often uncomfortable read.  I kept wanting to yell at Travis because he was being so dumb, but he wasn't really.  He was being sixteen.

If you don't believe me, here's the blurb...

Listen — Travis Coates was alive once and then he wasn’t.Now he’s alive again.Simple as that.The in between part is still a little fuzzy, but he can tell you that, at some point or another, his head got chopped off and shoved into a freezer in Denver, Colorado. Five years later, it was reattached to some other guy’s body, and well, here he is. Despite all logic, he’s still 16 and everything and everyone around him has changed. That includes his bedroom, his parents, his best friend, and his girlfriend. Or maybe she’s not his girlfriend anymore? That’s a bit fuzzy too.Looks like if the new Travis and the old Travis are ever going to find a way to exist together, then there are going to be a few more scars.Oh well, you only live twice
Posted by Kate Larkindale at 10:55 AM