Books I Loved - Glory O'Brien's History of the Future 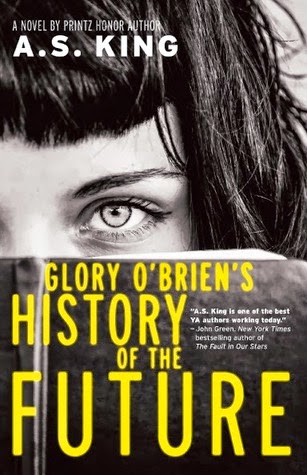 I just read this one recently and it's one of those stories that sticks with you.  It's about a girl who, with her friend on the commune across the street, drinks the remains of a petrified bat and starts seeing visions of the future.  And the future doesn't look good.

But her present isn't that great either.  Her Dad is pretty absent most of the time and her mother committed suicide years ago, leaving nothing but a dusty darkroom and an inexplicable book of photographs.  Her best friend is more interested in screwing another commune kid in the fields than hanging out.

The way the terrible visions of the future intercut with the things going on in the present each time Glory looks at a new person is cleverly done, and the portrait of the new world painted is chilling.  This book balances perfectly on the edge of way too weird and just weird enough and I couldn't put it down.

Here's the blurb in case I haven't convinced you.

Would you try to change the world if you thought it had no future?

Graduating from high school is a time of limitless possibilities — but not for Glory, who has no plan for what's next. Her mother committed suicide when Glory was only four years old, and she’s never stopped wondering if she will eventually go the same way... until a transformative night when she begins to experience an astonishing new power to see a person’s infinite past and future. From ancient ancestors to many generations forward, Glory is bombarded with visions—and what she sees ahead of her is terrifying.

A tyrannical new leader raises an army. Women’s rights disappear. A violent second civil war breaks out. And young girls vanish daily, sold off or interned in camps. Glory makes it her mission to record everything she sees, hoping her notes will somehow make a difference. She may not see a future for herself, but she’ll do everything in her power to make sure this one doesn’t come to pass.

In this masterpiece about freedom, feminism, and destiny, Printz Honor author A.S. King tells the epic story of a girl coping with devastating loss at long last—a girl who has no idea that the future needs her, and that the present needs her even more.
Posted by Kate Larkindale at 9:51 AM