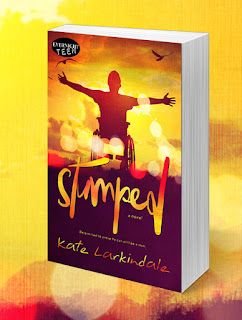 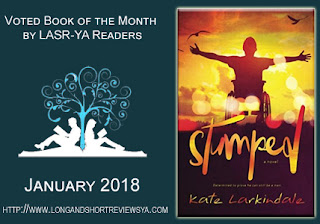 Some reviews for Stumped:

"As a person who works with students who have a variety of disabilities, I am happy to report that Ms. Larkindale did a wonderful job with this topic. She not only captures the language and emotions of adolescents, but also the heartbreak and difficulty of being a teen with a disability or terminal illness. The main character in this story, Ozzy, isn't a great kid - he won't melt your heart with his insight and strength and willingness to "make the best" of his situation. That's precisely what I liked about this story! He is a real teenage boy. So preoccupied with sex and his body that he can't see the blessings in front of him such as his friends and family. It is very interesting to read his evolution and understanding about what it means to live with a disability. The secondary characters of his family, the sex workers and friends in group are also well written, though I think she could have spent more time developing Miranda. Overall, a very good read and a GREAT addition to the YA genre. Highly recommend!" - V. Davis-Showell

"I was in a reading slump and although I have hundreds of books on my kindle nothing was grabbing me or rather fitting the mood I was in ... last chance saloon - before tantrum - Stumped. I loved reading this book. The characters were all rounded and seen for Ozzy's perspective so they grew to a whole as you journeyed through the book.

Ozzy's adventures to get laid offer you a myriad of emotions from laugh out loud to 'I'm crying on the inside'. A delicate age for any teenager, add in a body changing accident and you have a confused, desperately unhappy young man trying to redefine his place in the world. I would absolutely love there to be a sequel as there were a few issues I need to see resolved - his relationship with his Dad, Finn becoming wonderful (perhaps his own story), and his mother really deserves a love interest. Also a major event was just about to knock Ozzy to the ground again and it would be interesting to see how he copes with that and returning to school.

Thoughout the novel, the writing is top quality. There are no bits that lag. Ozzy is never annoying when he could so easily have been. It is nicely paced. Fingers crossed we get more from this family!" - Alice Gibson

"This book was so heartbreaking but put so much into perspective on the life of a person who has lost the ability to walk. Just the writing alone was so touching and not easily forgotten. The characters brought the book to life and made for an extremely great story." - Debbins

"What would you do if at the most pivotal time in your life, when you're at the edge of finding out what sex is and growing more into manhood as most boys to men see it, you instead lose your legs? Your super-hot girlfriend? And your view of the world around you?
Well, if you're Ozzy, you lash out. You curse. You act like a real teenage boy who feels like nothing is ever going to be the same again. Because you know what, it's not.

In Stumped, Ms. Larkindale provides a richly populated and emotionally charged journey to uncover just what Ozzy does and who he does it with. And in his journey, Ozzy is not a sappy cut-out designed to gloss over all the darkness of such a life-changing event, nor is he a permanently broken guy who will never find his way. Instead, we meet a real almost man, who finds out that humanity has quite a number of different views from which to grow up.

I highly recommend this emotionally-resonant work and its "stumped" main character. Sometimes being mixed up is the beginning of something quite interesting." - Zooboo


Mom didn’t lie. She’s still there when I wake up. I turn my head and find her in the chair, chin slumped to her shoulder, mouth open as she sleeps. She looks old. Why have I never noticed? My mouth is dry again and I search around for the water. Ah, there it is. A whole jug of it, sitting next to the plastic cup with the kiddie straw in it. It’s right beside the bed, on some sort of low cabinet. I can reach it. At least, if I can make my body move, I can.

I’m not as foggy as I was the last time I woke up, so I’m confident I can do this simple chore. But first I need to sit up. I press my hands into the mattress and push myself upward. Sharp pain slices through my legs. I suck in air, gritting my teeth against it as I flop back into the pillows. Okay, so maybe sitting up isn’t going to be the piece of cake I thought. I guess I busted my legs in the crash.

I remember it now. The light, the car skidding out of control, the voices and confused thoughts. I crashed the car. That’s why I’m here. I wonder if the car’s redeemable at all. It’s a piece of crap, but it’s my piece of crap. I might insult it several times a day, but I love it. I hope it’s not wrecked beyond repair.

My eyes creep toward the water again. I’m so thirsty. I have to have a drink. It’s so close. All I need to do is reach out and shake Mom’s knee and I’m sure she’ll hand me the cup, but she looks so exhausted. I should let her sleep.

Steeling myself for the pain, I try rolling onto my side. It hurts like hell, but I manage it. Various tubes and wires connected to me tug at my skin, but I ignore it. Yeah! Chalk one up for Ozzy. What a hero, he can roll over in bed. From there, I try pushing myself up with my arms and into a sitting position. I gasp at the glassy pain, but this time I don’t give up. I wind up on my butt. From there I’m pretty sure I can lean over and reach the water. I fix my eyes on the prize, measuring the distance. It’s not far. I can do this. Stretching out my arm, I reach for it. When my fingers close around the cup, I feel an absurd sense of accomplishment. I sit back, clutching the cup, surprised to discover I’m breathing heavily. Damn, I must be out of shape. Already. I’m going to have to get back into the pool as soon as I can. Otherwise I have no shot at Nationals.

I drink deeply, gulping down the cool water. I’ve never known water to taste this good. This is what it must be like for people who get lost in the desert when they’re found. When the cup is empty, I let it drop. It bounces across the bed. I expect it to stop, its progress to be barricaded by my legs, but it keeps going, rolling to the opposite side and tumbling from the edge.

I sit up straighter and stare down the length of the bed, seeing the way the sheets and blanket lie flat against the mattress, undisturbed by the mounds of my legs and feet. I stare at the smooth bedclothes. I don’t get it. What is going on here? I’m dreaming. That’s got to be it. This is some full-on fucking nightmare and I’ll wake up soon. But I don’t feel like I’m dreaming.

Where are my legs?