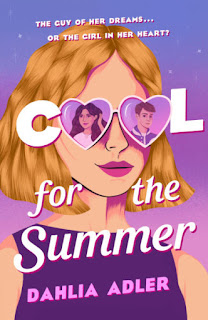 I'm a huge fan of Dahlia's, so when NetGalley gave me the chance to read this early, I jumped at it (thanks, NetGalley!)

Lara has had a crush on Chase ever since they started high school.  She's had eyes for no one else.  So when, on the first day of senior year, he talks to her and seems interested, she should be on Cloud 9.  All her dreams are finally coming true.

But that same day Jasmine shows up at her high school and basically ignores her.  Lara is confused.  She and Jasmine spent the summer together and what started as a tentative friendship quickly became something much, much more.

This book unfolds in two time periods, one following Lara and Jasmine's budding summer romance, and one in the present where Lara struggles to reconcile her feelings about Jasmine while also trying to enjoy having the boy she always wanted basically falling at her feet.

I really enjoyed this one.  It's light and fluffy and fun to read while having some real substance beneath the surface.  Lara's struggle to figure out her sexuality felt very real and is something many readers out there will have experienced and recognize.

I wish a little more time had been spent on building the Chase-Lara relationship though.  It seemed like he saw her in the hall and was instantly smitten.  Given they've been at school together for years already, and Lara's crush is no big secret, it felt a little too quick.  I get that she changed over the summer, had a haircut and became more confident, but it still seemed too quick.  I wished he'd taken a little time to figure out the changes were more than a superficial change of hair and a tan.

The other thing that bugged me, as it does in a lot of more recent books I've read, is the focus on having as many different types of people represented in the cast of characters as possible.  I totally agree that diversity is important, but unless a character's ethnicity or sexual preference is relevant to the story, I'm not sure that we really need to know these things about side characters who show up once or twice.  It starts feeling like box-ticking for diversity and that's really not the point.

Overall, I'd recommend this one.

Lara's had eyes for exactly one person throughout her three years of high school: Chase Harding. He's tall, strong, sweet, a football star, and frankly, stupid hot. Oh, and he's talking to her now. On purpose and everything. Maybe...flirting, even? No, wait, he's definitely flirting, which is pretty much the sum of everything Lara's wanted out of life.

Except she’s haunted by a memory. A memory of a confusing, romantic, strangely perfect summer spent with a girl named Jasmine. A memory that becomes a confusing, disorienting present when Jasmine herself walks through the front doors of the school to see Lara and Chase chatting it up in front of the lockers.

Lara has everything she ever wanted: a tight-knit group of friends, a job that borders on cool, and Chase, the boy of her literal dreams. But if she's finally got the guy, why can't she stop thinking about the girl?