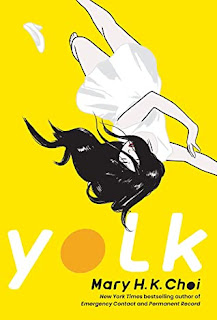 This is the third book I've read by Mary Choi, and she has a firm fan in me.  She writes complex, realistic characters whose problems and conflicts are the same as ones you and I might face on a day-to-day basis.
In Yolk, the main character is Jayne, a nineteen-year-old college student who is basically just stumbling through life.  She's studying fashion, but isn't really sure if that's what she wants.  She lives in an illegal hovel with a guy she was once involved with but now seems to only want her for a place to crash.  She's not really in contact with her family back in Texas, or with her older sister who lives a successful, glamorous life in New York.
And she has an eating disorder, but she doesn't really like to think about that too much.  She has it under control, right?
Then her sister shows up unexpectedly, wanting to talk.  June is everything Jayne isn't.  She's successful, put together, lives in a large and well-appointed apartment and has a high-powered job in finance.  Now she also has cancer and she needs Jayne's support.
Suddenly, after having barely spoken since high school, Jayne and June are living together.  With death staring them in the face, they are forced to rediscover their bond as sisters and both of them find it difficult to keep their secrets from each other while in such close proximity.
I really enjoyed this book.  The relationships were all complex and messy, even where there was love involved.  Jayne's perspective on life and herself is just skewed enough to keep you constantly on edge, never quite sure what she might do next.  She's unpredictable and impulsive and really not at all in control even though she wants those around her to believe she is.
It's called YA, but the characters are older than they usually are in YA and the issues they are dealing with feel more mature.  If NA wasn't so tightly bound to romance, I'd call this NA, but although there are romantic moments in here, it isn't really about the romance.  That relationship is peripheral to June and Jayne's relationships and the sacrifices the two of them make for each other.
I'd definitely recommend this to people who enjoy books with complex, messy characters who live complex, messy lives.

From New York Times bestselling author Mary H.K. Choi comes a funny and emotional story about two estranged sisters switching places and committing insurance fraud to save one of their lives.

Jayne Baek is barely getting by. She shuffles through fashion school, saddled with a deadbeat boyfriend, clout-chasing friends, and a wretched eating disorder that she’s not fully ready to confront. But that’s New York City, right? At least she isn’t in Texas anymore, and is finally living in a city that feels right for her.

On the other hand, her sister June is dazzlingly rich with a high-flying finance job and a massive apartment. Unlike Jayne, June has never struggled a day in her life. Until she’s diagnosed with uterine cancer.

Suddenly, these estranged sisters who have nothing in common are living together. Because sisterly obligations are kind of important when one of you is dying.
Posted by Kate Larkindale at 11:11 AM