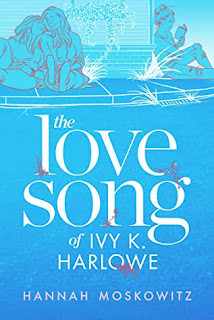 I was so excited to have won an ARC of this from Hannah that I started reading almost as soon as it hit my in-box.

This gloriously queer romance is so much more than it initially seems, and although it's a fairly quiet book in terms of the plot, there are so many complex character arcs it never feels quiet.

Andie and Ivy have been best friends forever. They've grown up together, come out together and lived through all of life's messiness and tragedy together. Now out of high school, they're both still trying to figure out what they want to do next. Neither went straight to college and still stuck in their small hometown of Providence, they're beginning to feel the need to move on to whatever is next.

Ivy scratches that itch by being the biggest in any room. She's unabashedly sexual and sleeps with anyone she wants to and when she's on the dance floor, she's the one no one can tear their eyes from.

Andie is more reserved. She goes with Ivy to the club, but mostly so she can make sure she gets home safely. Watching Ivy wrap herself around any woman she finds attractive hurts because Andie has been secretly (or maybe not so secretly) in love with Ivy for years. She lives with the constant hope that when Ivy is finally ready to settle down, it will be with her. She just has to wait.

Then Dot shows up on the scene and what looked like one of Ivy's usual one night stands becomes something else. Dot refuses to leave Ivy alone and the girl who doesn't do relationships starts looking very much like she is in a relationship.

I loved the way this book explored both the nature of romantic relationships and the way friendships, even lifelong ones, change over time. I didn't always like Ivy. She was often selfish and careless with peoples' feelings and I kind of hated that her friends all just accepted that about her. But I think we've all had that one friend that both made your life more exciting, and more confusing. The one you always swear you won't forgive again, yet end up doing so over and over.

The evolution of Dot and Ivy's relationship felt authentic and real through Andie's eyes and her own confusion and hurt was raw and painful to live through. She had support though, in her wider friend group and from parents who are just the right amount of supportive and involved.

I would definitely recommend this one, especially for those who like books that explore the complexities of female friendships and the way they grow and change once romantic relationships start forming.

Ivy K. Harlowe is a lot of things.

She’s the center of attention.

She is, without fail, the hottest girl in the room. Anytime. Anyplace.

She has freckles and dimples and bright green eyes, and with someone else’s energy she’d be adorable. But there is nothing cute about Ivy. She is ice and hot metal and electricity.

She is the girl who every lesbian wants, but she has never been with the same person twice. She’s one-of-a-kind but also predictable, so I will always be Andie, her best friend, never Andie, her girlfriend.

Then she meets Dot, and Ivy does something even I would have never guessed—she sees Dot another day. And another. And another.

Now my world is slowly going up in smoke, and no matter what I do, the flames grow higher. She lit that match without knowing who or what it would burn.

Ivy K. Harlowe is a lot of things.

But falling in love wasn’t supposed to be one of them…unless it was with me.
Posted by Kate Larkindale at 11:33 AM