My friend Patricia Lynne has a new book out today, so I'm celebrating her release here on the blog.  It's a delicious collection of bite-sized stories about all your favourite horror creatures.  Each story is only 200 words long, so it's the perfect book for dipping into while waiting in queues - something I have done more of recently than I ever remember doing before.  All at a safe 2m distance, of course! 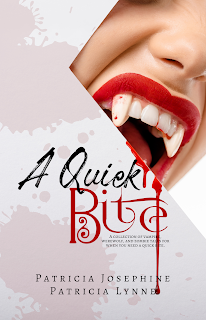 These monsters tickle our imagination.

Sink your teeth into a collection of tales about paranormal creatures that go bump in the night. Each story is told in exactly 200 words and designed to give you a quick bite no matter how busy your day is.

It was a well-known fact that vampires only came out at night. They prowled the shadows, snatching any fool dumb enough to venture out after the sun had set.

Parents taught their children about the danger. Which prompted teenagers to dare each other to face the darkness. Most of the youths chickened out once they were standing at the open door with inky blackness stretched out before them. Those who didn’t were found dead and drained the next morning.

Only through vigilance did the village survive. Don’t go out after dark was beaten into the residents’ heads. Sometimes literally.

They hoped that by denying the vampires victims, the undead would be leave in search of easier prey. The villagers didn’t think about others who would suffer when that happened. It was a matter of survival, and those people would have to learn if they wanted to live. At least, that’s what they told themselves to ease their guilt.

But the vampires weren’t going anywhere. Immortality granted an abundance of patience. They just had to wait long enough, and the villagers would become compliant. They would forget why they feared the night. They would come out. And then...the feast would begin.

We all love a good zombie apocalypse movie where the good guys fight off hoards of zombies and save humanity. But are zombies really that far-fetched? Maybe not if you look deeper into mother nature.

Have you ever heard of Ophiocordyceps? It is a fungi. Harmless right? Not if you’re an ant. When an ant come across these fungal spores in nature, the fungus infects the insect and spread through its body. Fungal cells in the ant’s head releases chemicals that hijack the insect’s central nervous system. The fungus can then force the ant to climb high. There, it kills the ant and a stalk grows out of the back of the ant’s head so spores can be released to infect more ants on the grounds below. 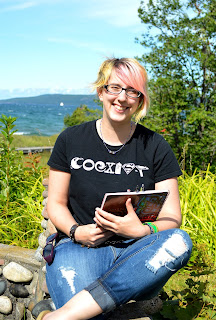 About the Author
Patricia Josephine is a writer of Urban Fantasy and Sci-Fi Romance books. She actually never set out to become a writer, and in fact, she was more interested in art and band in high school and college. Her dreams were of becoming an artist like Picasso. On a whim, she wrote down a story bouncing in her head for fun. That was the start of her writing journey, and she hasn't regretted a moment. When she's not writing, she's watching Doctor Who or reading about serial killers. She's an avid knitter. One can never have too much yarn. She writes Young Adult Paranormal, Science Fiction, and Fantasy under the name Patricia Lynne.

Patricia lives with her husband in Michigan, hopes one day to have what will resemble a small petting zoo, and has a fondness for dyeing her hair the colors of the rainbow.