Books I've Read: Four Days of You and Me 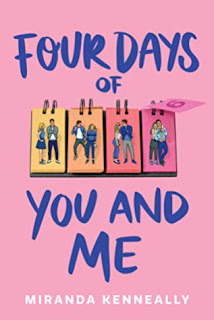 I've been a big fan of Miranda Kenneally's for some time now, so I might have squeed a little when NetGalley approved me for this ARC.  Kenneally writes great girl characters who take charge of their own lives and destinies, even when they are doing something unexpected or unusual.

Or at least, that's what I expect from a Kenneally novel.

This one is different.

Set over four years and four class trips, the book follows Lulu and Alex as their relationship changes through the years.  Initially enemies thanks to something that happened back in grade school, Lulu and Alex find themselves drawn to one another after getting locked into an escape room together while on a field trip to a museum.

Lulu is a good girl, shy and bookish. She spends a lot of time in her room working on a graphic novel she's been writing for years.  Alex is a baseball player and spends most of his spare time working at his family's pizza restaurant.  He runs with the popular crowd at school and has the sense of entitlement to match.

Yet somehow, Lulu and Alex work.  Until they don't.  But even then, they can't stop looking at one another.  Even when each of them is dating someone else.

This is a fairly straightforward romance novel with all the usual falling in and out of love, yearning and angst.  Because we only saw the characters for brief moments in each of the four years, we only saw the key moments in their relationship rather than the fullness of it.

I think I would have liked this more if the characters had felt more authentic.  Alex was both a douche and too good to be true at the same time, while Lulu was more insipid than I would have expected from a Miranda Keneally girl.  Quirks the characters were given felt like identifying markers rather than organic parts of real people.  A boy with a troubled home.  A vegan.  A gay athlete unwilling to come out.

But despite these things, I did enjoy reading the book.  The jumping around in time was a fun way to see how the relationship grew and changed over time.  And the different places they went on their school trips was interesting too.  I was almost embarrassed for them in London when they acted so much like typical American tourists...

So while this is not my favorite book by this author, I don't regret reading it.

A new swoon-worthy romance following a couple's love story on the same date over four years.

Every May 7, the students at Coffee County High School take a class trip. And every year, Lulu’s relationship with Alex Rouvelis gets a little more complicated. Freshman year, they went from sworn enemies to more than friends after a close encounter in an escape room. It’s been hard for Lulu to quit Alex ever since.

Through breakups, make ups, and dating other people, each year’s class trip brings the pair back together and forces them to confront their undeniable connection. From the science museum to an amusement park, from New York City to London, Lulu learns one thing is for sure: love is the biggest trip of all.