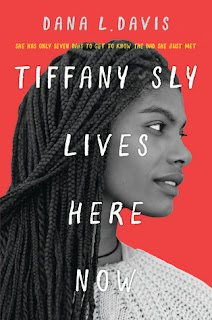 This is one of those books I really enjoyed reading, but certain things about it made me really uncomfortable.

Tiffany's mother has just died of cancer and just before she's about to leave her grandmother's house in Chicago to live with the father she's never met, another man shows up at her door claiming he's her father. Unable to deal with this new twist in her already chaotic life, Tiffany tells him to leave. But the seed of doubt is sown.

The doubt grows once she gets to California and discovers her father has four other daughters, a white wife, a religion Tiffany can't understand and a million seemingly arbitrary rules she will have to follow.

As Tiffany tries to settle in, she can't help wondering about the other man.  Especially once she reaches out to him and discovers they have more than a little in common.  With only seven days before he shows up demanding a paternity test, Tiffany is unsure how hard she should try and bond with her confusing new family.

Luckily there's an oasis of sanity across the street in the form of the strange Marcus McKinney and his two mothers who welcome Tiffany with open arms.  Unfortunately, Tiffany's father has an irrational hatred of these people and warns her not to associate with them.

I really enjoyed Tiffany's dilemma, being caught between two men who might be her father.  The more time she spent with Anthony and his family, the more I wished the other man's claim was true.  I also really enjoyed he struggle to settle with a family who were so completely different to the one she had grown up with.  And watching her try and bond with her new sisters was also and enjoyable part of the story.

What I found problematic was her father, Anthony.  His rules seemed arbitrary and overbearing.  The way he treated the youngest daughter who is autistic was also terrible, bordering on abusive.  I found his forcing of his religious beliefs on Tiffany was distasteful and his bigotry regarding the family across the the street was just the final straw.

And his wife let him get away with it?  I could almost understand her staying and not standing up to him if she was dependent on him, but she is the one with the wealth in the relationship.  She could have taken the kids and moved out any time.

Overall, despite the issues I had with Anthony and his behavior, this is an interesting book and one I would cautiously recommend.

For sixteen-year-old Tiffany Sly, life hasn’t been safe or normal for a while. Losing her mom to cancer has her a little bit traumatized and now she has to leave her hometown of Chicago to live with the biological dad she’s never known.

Anthony Stone is a rich man with four other daughters—and rules for every second of the day. Tiffany tries to make the best of things, but she doesn’t fit into her new luxurious, but super-strict, home—or get along with her standoffish sister London. The only thing that makes her new life even remotely bearable is the strange boy across the street. Marcus McKinney has had his own experiences with death, and the unexpected friendship that blossoms between them is the only thing that makes her feel grounded.

But Tiffany has a secret. Another man claims he’s Tiffany’s real dad—and she only has seven days before he shows up to demand a paternity test and the truth comes out. With her life about to fall apart all over again, Tiffany finds herself discovering unexpected truths about her father, her mother and herself, and realizing that maybe family is in the bonds you make—and that life means sometimes taking risks.
Posted by Kate Larkindale at 10:24 AM