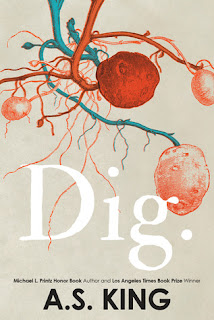 I have been a longtime fan of A.S. King, and this book just proves why I'm right to rush out to read her new book as soon as it becomes available.

Like another book I loved this year (Bridge of Clay) it isn't the easiest book to read.  It's confusing to begin with, the characters not given names, but titles.  And then opening the book with a chapter about a pair of old people?

But as the book unfolds, the connections between these seemingly random strangers reveal themselves and the truths about why they are estranged from each other become clear.

I actually can't say a lot about the book here without ruining it for you.  It's a book I read in a single afternoon because once I started, I couldn't put it down.  It's about racism and tolerance, and family and the ways people divide and come together and misunderstandings that lead to a lifetime of isolation.  It's complex and honest and truthful.

It's one of the best books I've read all year.

So just read it, okay?

And while I've put the blurb here for you, I don't think you should read it.  I didn't, and I'm glad I didn't because the book was so much more of an adventure and a pleasure without having read it.

The Shoveler, the Freak, CanIHelpYou?, Loretta the Flea-Circus Ring Mistress, and First-Class Malcolm. These are the five teenagers lost in the Hemmings family's maze of tangled secrets. Only a generation removed from being simple Pennsylvania potato farmers, Gottfried and Marla Hemmings managed to trade digging spuds for developing subdivisions and now sit atop a seven-figure bank account, wealth they've declined to pass on to their adult children or their teenage grand children.

"Because we want them to thrive," Marla always says.

As the rot just beneath the surface of the Hemmings precious white suburban respectability begins to spread, the far flung grand children gradually find their ways back to each other, just in time to uncover the terrible cost of maintaining the family name.
Posted by Kate Larkindale at 10:23 AM