Books I've Read: I Wish You All The Best 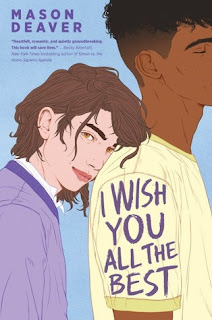 This was an enjoyable read.  Ben is close to finishing their senior year when they decide it's time to stop hiding the fact they're non-binary from their parents.  They're not entirely sure how they will take it, but don't expect to be kicked out of the house.

Ben finds themself on the street and is forced to call the sister they haven't spoken to in ten years.  A sister who also left home under a cloud of parental anger.

The rest of the book follows Ben as they navigate a new life with Hannah and her husband, Thomas.  They think they are going to be able to lie low at their new school, just make it through the rest of the year without any more drama.  They decide to keep their non-binary identity a secret from everyone except Hannah, Thomas and their therapist, not wanting any more chaos in their life.

But Ben doesn't figure on meeting Nathan, the charismatic boy who seems determined to be friends even when Ben deliberately tries to avoid it.  And the more time they spend together, the more certain it becomes that this friendship is moving toward something else.

I enjoyed this book.  Ben was an interesting narrator and their struggles were ones that will resonate with a lot of people, not only those struggling to find their place on the gender spectrum.  Their parents were really terrible and I found it difficult to believe that, having already lost their daughter, they wouldn't have tried a little harder with Ben to understand and to be supportive.  And not the kind of trying that involves demands and threats...

I liked the relationship between Ben and their sister and brother-in-law although it all seemed a little too easy for people who hadn't seen or spoken to each other for a decade.  And Ben would have been a little kid when Hannah left, so the fact they'd never spoken as grown-ups made the quick reconciliation and mutual understanding feel a little false.

Given the reason Ben was forced away from home was their non-binary identification, not a lot of time was spent on that.  I would have liked a little more about Ben's feelings about this, and how they came to the conclusion this was their reality.  There were a few places Ben became uncomfortable with people calling them 'son' or 'man' or using he/him pronouns, but it was never more than a passing thought that they didn't like it.

But apart from that, I found spending a few hours with these people to be a good time.  And Nathan was a worthy love interest.  I think every school has someone like him, one of those people who commands attention just by walking into a room.  Someone whose energy seems pitched just a little higher than everyone else's.

When Ben De Backer comes out to their parents as nonbinary, they're thrown out of their house and forced to move in with their estranged older sister, Hannah, and her husband, Thomas, whom Ben has never even met. Struggling with an anxiety disorder compounded by their parents' rejection, they come out only to Hannah, Thomas, and their therapist and try to keep a low profile in a new school.

But Ben's attempts to survive the last half of senior year unnoticed are thwarted when Nathan Allan, a funny and charismatic student, decides to take Ben under his wing. As Ben and Nathan's friendship grows, their feelings for each other begin to change, and what started as a disastrous turn of events looks like it might just be a chance to start a happier new life.

At turns heartbreaking and joyous, I Wish You All the Best is both a celebration of life, friendship, and love, and a shining example of hope in the face of adversity.
Posted by Kate Larkindale at 10:32 AM