Books I've Read: What Makes Us 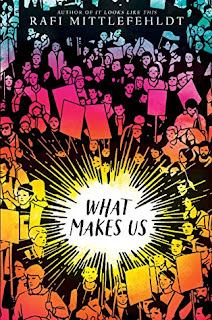 This was one of those books where the subject matter was really fascinating, but the writing didn't really do it justice.  Maybe it's because I had an ARC and the formatting was kind of screwed up, but I think that was only a small part of it.

Eran is concerned with social justice.  He knows he has a problem with anger and blames that on his mother who also has moments where she lashes out in irrational rage.  He never knew his father so has to believe that if he had, his father's influence may have changed him.

That believe is dramatically shattered when, after things get heated at a supposedly peaceful protest, Eran discovers his father was a terrorist responsible for an horrific bombing.

Suddenly the community he has lived in for as long as he can remember is taking sides.  Some want him and his mother driven out of town.  Others support them.

As they deal with the aftermath of this discovery, Eran learns that there are a huge number of factors that make us who we are.

This is important subject matter and very relevant to these times.  The struggle Eran faces is one that thousands of people face every day in some shape or form.  The book tells the story largely from Eran's point of view, but occasionally there is a section from his mother, and a few sections are narrated by a school friend who is also struggling with her identity after discovering some things that don't add up about her own past.

Eran was kind of an annoying character and I never felt anything he thought or said rang 100% true.  Both he and Jade felt younger than the seventeen they were supposed to be.  Maybe this is because they are both quite sheltered, with parents who are both over-protective and secretive about the reasons why.

I read this ARC on my Kindle and there were no breaks in the text to let me know when the POV changed, which was confusing, especially when the POV changed to the mother.  Jade and Eran's voices were also so similar it was difficult to understand when they switched too.

So while I thank NetGalley for giving me the opportunity to read this ARC, I didn't enjoy the book as much as I had hoped I would.

A viral video reveals a teen’s dark family history, leaving him to reckon with his heritage, legacy, and identity in this fiery, conversation-starting novel.

Eran Sharon knows nothing of his father except that he left when Eran was a baby. Now a senior in high school and living with his protective but tight-lipped mother, Eran is a passionate young man deeply interested in social justice and equality. When he learns that the Houston police have launched a program to increase traffic stops, Eran organizes a peaceful protest.

But a heated moment at the protest goes viral, and a reporter connects the Sharon family to a tragedy fifteen years earlier — and asks if Eran is anything like his father, a supposed terrorist. Soon enough, Eran is wondering the same thing, especially when the people he’s gone to school and temple with for years start to look at him differently.

Timely, powerful, and full of nuance, Rafi Mittlefehldt’s sophomore novel confronts the prejudices, fears, and strengths of family and community, striking right to the heart of what makes us who we are.
Posted by Kate Larkindale at 12:30 AM