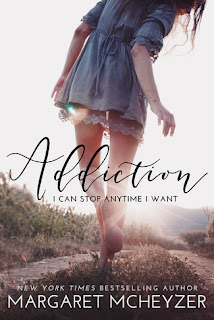 Hannah is a good girl who falls into a really creepy, controlling relationship with a drug dealer who becomes obsessed with her.  This was the first part of the story that really didn't work for me.  Hannah is a smart girl with a loving family and good friends.  When creepy Edgar starts following her around and insisting she ride in his car, I couldn't believe she wouldn't have said something about it.  Or called the police.

But no.  She starts 'feeling things' for this guy who is essentially stalking her.  And her best friend, despite noticing she's acting weird and disappearing a lot, doesn't even do anything about it, apparently too wrapped up in her own new boyfriend.  Then Hannah goes on a date with Mr. Creepy just to get him off her back.  And he drugs her and she becomes a sex maniac.  In this scene, I was sure he'd dosed her with Ecstasy, but apparently liquid meth is even better at making you horny for a guy you barely know and don't like to the point of tearing your clothes off and basically raping him.  Despite being a virgin with no experience.

The whole Edgar-Hannah relationship was unbelievable.  Any modern girl would be far too savvy and clued up to fall for his brand of bullshit.  It only becomes believable once he's got Hannah hooked on meth and dependent on him to supply it.  And once she's there, he starts using her for all kinds of other things that she doesn't fully understand because her brain is so fried from the meth.

Overall, this was probably a fairly realistic portrait of meth addiction, but the way Hannah fell into it did not feel realistic at all.  It's far more likely that a girl like Hannah would have been given a taste of it at a party or some other gathering of people her own age.  The way Edgar pursued her and groomed her just felt so wrong, and her reaction to it made no sense.

So I won't be recommending this one.  It seems I'm in the minority - this book has a lot of great reviews from other reviewers - but I'm sticking with my assessment.

Drugs ruin people’s lives.
I should know, they destroyed mine.
I’m Hannah and I got hooked on ice. What started as a trickle, ended with a tsunami washing everything away; my family, my life.
I’m not sure you’re ready to read my story; it’s real and confronting.
Open the book, read the pages and see how easy it is for anyone to get addicted.
Ice affects all types of people. It doesn’t discriminate.
It will SCREW. YOU. UP.
Posted by Kate Larkindale at 11:27 AM