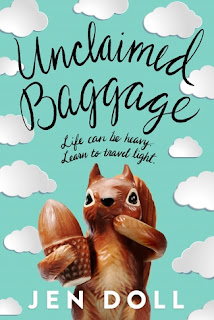 This was one of those weird books that felt kind of light and fluffy to read, but actually had some really serious stuff lurking under that candy-floss exterior.  I'm not entirely sure the whole thing worked, tonally, but I enjoyed reading this very much.  I also want to work in a store like Unclaimed Baggage!

When Nell moves to a new town in the South, she has a lot to acclimatize to.  She misses her boyfriend and the friends she left behind, hates the heat and can't figure out what there is to do in this place.  When she gets a job at Unclaimed Baggage, a store that sells the stuff in suitcases left behind in airports and never claimed, she meets Doris and finds her new best friend.

Grant has his own problems.  His drinking has pretty much decimated his role as star of the local football team and his relationship with his girlfriend, his parents and pretty much everyone else close to him.  To try and keep himself busy and not thinking about his next drink, Grant takes a job at Unclaimed Baggage and finds himself all but adopted by Doris and Nell.

Despite her outgoing exterior, Doris is harboring her own secrets.  A few years back, at a church outing, she was groped on a waterslide and when she was upset about the assault, the church leader dismissed her distress and blamed her for the incident.  Doris hasn't been to church (or on a waterslide) since.

Over the course of the book, all three of these very different people find themselves and ways to deal with their problems by leaning and relying on each other.

I enjoyed this book.  The characters were each distinctive and had their own quirks.  The depiction of small-town life was realistic and so well drawn I could feel the heat.  And while sometimes the flippant tone didn't match the events going on, I understand that sometimes the only way to deal with difficult subject matter is with humor.

So I'd recommend this one.  Even if it's just for the stuff these kids find in the left-behind suitcases!

In Jen Doll's young adult debut novel, Unclaimed Baggage, Doris--a lone liberal in a conservative small town--has mostly kept to herself since the terrible waterslide incident a few years ago. Nell had to leave behind her best friends, perfect life, and too-good-to-be-true boyfriend in Chicago to move to Alabama. Grant was the star quarterback and epitome of "Mr. Popular" whose drinking problem has all but destroyed his life. What do these three have in common? A summer job working in a store called Unclaimed Baggage cataloging and selling other people's lost luggage. Together they find that through friendship, they can unpack some of their own emotional baggage and move on into the future.
Posted by Kate Larkindale at 11:27 AM